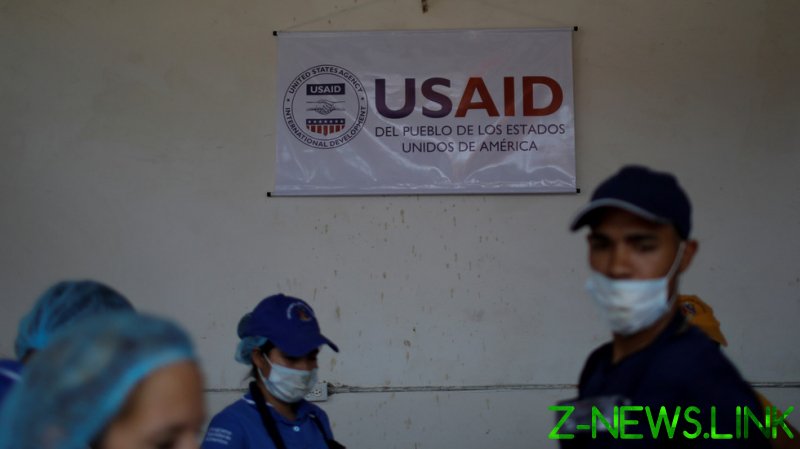 On April 16, the oversight division of the US Agency for International Development (USAID) quietly published a review of the organization’s activities in Venezuela from January-April 2019. Its seismic findings were almost universally ignored by the mainstream media, although the Grayzone certainly took notice.

During that chaotic period, Juan Guaido declared himself the country’s acting and rightful leader, challenging the legitimacy of elected President Nicolas Maduro, leading to fiery upheaval engulfing the streets of Caracas. In a widely publicized incident on February 23, trucks carrying USAID “humanitarian commodities” from Colombia into Venezuela were stopped at border crossings and set ablaze.

Western news outlets and politicians were quick to blame the arson on government forces, framing the action as a dastardly attempt to prevent vital supplies reaching citizens desperately in need.

However, journalist Max Blumenthal was actually on the ground in Venezuela at the time, and compiled compelling evidence the fires were started by anti-Maduro activists. Two weeks later, the New York Times published video evidence proving this was in fact the case, without acknowledging Blumenthal had already busted the ploy wide open.

The event is specifically referenced in the USAID review, and while the language is highly euphemistic, reading between the lines it appears the aid was never intended to reach Caracas, and the incendiary episode was, in effect, a Washington-directed “false flag” event.

In interviews with investigators, senior USAID staff admitted the agency’s programs are “subject to foreign policy guidance from the National Security Council and State Department,” guidance which may “impact USAID’s ability to adhere to humanitarian principles and mitigate operational risks.”

In other words, no matter what positive ends its distribution of aid may achieve in some areas, the agency is ultimately answerable to the US military and intelligence agencies, while also engaging in activities that are anything but philanthropic at their behest as a result.

The review notes that it was in response to such “directives” – which included “taking actions that deviated from humanitarian principles and heightened security and fiduciary risks” – USAID dispatched those trucks to the Venezuelan border.

The State Department and National Security Council is reported to have specifically approached USAID for the purpose after the US government in January and February 2019 “identified USAID’s humanitarian assistance for Venezuelans as also serving as a key tool to elevate support” for Guaido’s illegitimate “interim government” and “increase pressure on the Maduro regime.”

Though it’s striking to see USAID’s shadowy nature spelled out in an official report intended for public consumption, the agency’s wide-ranging, insidious role in US efforts to reverse Venezuela’s Bolivarian revolution has been clear since 2010. That year, WikiLeaks published a US embassy cable from 2006 that was transmitted from Caracas to US diplomatic missions the world over – including Vatican City.

It noted that in August 2004, the US ambassador outlined his team’s “five point strategy” in Venezuela, which included “penetrating [Hugo] Chavez’ political base,” “dividingChavismo,” “protecting vital US business,” and “isolating Chavez internationally.” USAID’s Office of Transition Initiatives (OTI), which “provides fast, flexible, short-term assistance targeted at key political transition” –  i.e. facilitates regime change – was said to be central to these efforts.

OTI’s activities in Venezuela included supporting over 300 NGOs across the country “with technical assistance, capacity building, connecting them with each other and international movements, and financial support upwards of $15 million.”

Many of the NGOs which included initiatives “dealing with the rights of the handicapped,” and countering “revolutionary ideology” via “civic education” were said to have been specifically launched off the back of OTI funding. Quite some trojan horse, although USAID’s destabilization efforts aren’t always conducted under the bogus banner of democracy and human rights.

For example, in 2014 it was revealed that OTI had established ZunZuneo, a ‘Cuban Twitter’, in order to stir unrest in Havana. It was constructed via a nexus of secret shell companies and financed by foreign banks.

Tens of thousands of Cubans registered accounts on the social network over the course of two years. The plan was to build a receptive audience, then push them toward unseating the government of Raul Castro. Users were entirely unaware it was created by USAID, and that their sensitive personal data was surreptitiously being gathered in service of a prospective future coup.

In response to the scandal, then-White House press secretary Jay Carney said, “USAID is a development agency not an intelligence agency.” Allegations to the contrary have swirled for decades, and quite understandably. From 1962-1974, a core division of the agency was the Office of Public Safety (OPS), which tutored thousands of police officers in 49 countries over the course of its existence, and provided them with weapons and pacification equipment worth millions.

Its director was Byron Engle, a veteran of the Central Intelligence Agency (CIA). The OPS provided cover for its operatives overseas, helped Langley plant staff in the local police forces of countries of interest to Washington, and also worked as a prospective agent talent spotter. In the late 1960s, it became the subject of negative congressional scrutiny due to allegations equipment it provided and personnel it had trained were linked to torture, murder and disappearances across Latin America.

A US Government Accountability Office report on the OPS, published two years after it shuttered, concluded the unit “encouraged or condoned police brutality, taught or encouraged use of terror and torture techniques, and promoted creation of police states” – charges which government officials, perhaps unsurprisingly, denied.

That report also exposed how extensive support was provided to police forces in countries notorious for their brutal treatment of political dissidents today, including Indonesia, the Philippines, Saudi Arabia, Thailand, and Vietnam. Mercifully, no one seems to have been tortured or killed as a result of USAID’s cloak-and-dagger machinations in Venezuela, although the oversight review was far from glowing in its appraisal of the agency’s National Security Council and State Department-directed activities there.

For instance, USAID’s implementers in Colombia “did not assess the risks of fraud or develop risk mitigation strategies with anti-fraud control activities,” meaning untold funds and “humanitarian commodities” may have been pilfered by Guaido and his interim government.

After all, in June 2019, it was revealed the would-be leader’s entourage, including hundreds of defectors from the Venezuelan armed forces, had spent vast sums of aid money on expensive dinners, nightclubs and shopping trips in Bogota, as they awaited the downfall of Maduro. Said to have an appetite for “prostitutes, alcohol and violence,” the hotels they and their families stayed in went unpaid for three months despite Guaido’s promises to bankroll them, prompting their eviction.

Given the effort to remove the legitimate government of Venezuela remains abortive as of May 2021, it’s likely the ramshackle administration-in-exile has racked up an even bigger bill. Who will ultimately pick up that hefty tab is anyone’s guess.