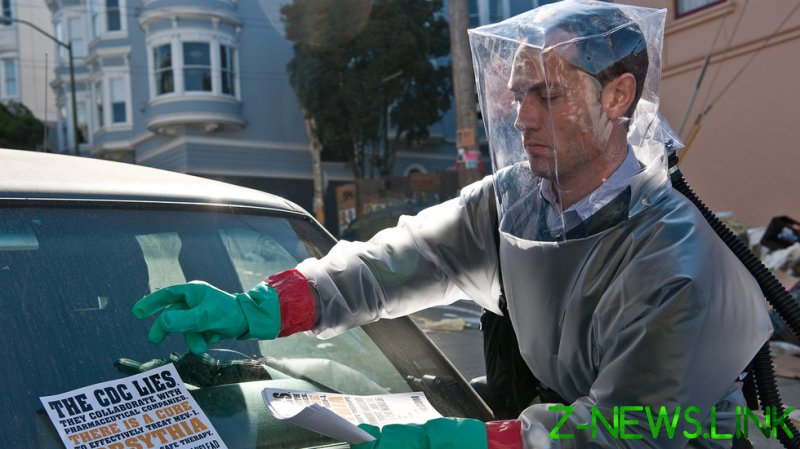 The US Centers for Disease Control and Prevention (CDC) is one of the fastest-growing federal agencies of recent decades. In 1987, their budget was $590 million but by 2020 it had ballooned to over $8 billion, leading journalist Eric Boehm to observe, “If the agency had grown with inflation since 1987, it would have a budget of about $1.3 billion today. Total federal spending, meanwhile, has grown from a hair over $1 trillion in 1987 to $4.4 trillion last year—which means that the CDC’s budget has grown faster [than] the government’s overall spending.”

A 2009 report by Senator Tom Coburn’s office into questionable spending at the CDC found they had invested $1.7 million in setting up their own Hollywood liaison office, “to get health messages into television and film.”  Since then, the CDC have worked on documentary series including ‘Breakthrough’ and the BBC’s ‘Horizon’, as well as episodes of the TV drama ‘Cedar Cove’ and the romantic comedy ‘My Lockdown Romance‘.

Perhaps their biggest Hollywood success was the 2011 pandemic thriller ‘Contagion’, directed by Steven Soderbergh. Nearly 1000 pages of documents released under the Freedom of Information Act detail not only the extensive support provided to the film-makers and cast, but also the CDC’s PR priorities for the movie.

‘Contagion’ depicts a global pandemic caused by a novel virus (sound familiar?), as well as the efforts of the scientific establishment and security state to contain it and minimise the number of deaths.

Because of their crucial role in this plot, the CDC granted the producers wide-ranging access, including tours of their brand new headquarters in Atlanta, along with research assistance and script reviews and input. They gave a lot of time and access to Kate Winslet, who played an Epidemic Intelligence Service (EIS) employee within the CDC who helps the infected, but ultimately succumbs to the virus and dies. She met with several real-life EIS officers to prepare for the role.

During the script review process, one email shows that CDC consultants were asked by the film-makers, “what kinds of things might dramatize the “uh oh” (cleaned up version) of recognition that this was really going to be [an] enormous problem.”  This apparently led to the upping-the-ante scene in the second act of the movie when it emerges that the virus has mutated and is now twice as lethal as before.

Satisfied with the script, the CDC granted access to some of their facilities for filming, provided technical advisors and consultants to the crew and to Winslet, alongside CDC personnel who appeared as background extras.

But the collaboration didn’t stop there. The CDC hosted a preview screening, resulting in officers sending emails describing the agency as the “star” of the movie and awarding them “five syringes out of five.”  They weren’t wrong that they were the star of the film, because the story structure of ‘Contagion’ has no one, single protagonist – the main character ends up being the CDC. Other emails responding to the screening labelled the film the “CDC’s Top Gun” and mentioned that it may be good for recruitment.

Evidently, the CDC saw the whole thing as a massively successful PR coup, their big Hollywood debut which rivalled the efforts of their brethren at the Pentagon, CIA, Homeland Security and the rest. They loved the movie, and loved what it did for them. One email sums it up, saying, “We will all benefit, through budget potentially and image and respect, from this portrayal.”

Worryingly, the CDC documents are replete with the language of an intelligence agency, rather than a public health body. The files refer to global surveillance as a necessary tool in the fight against infectious disease, and even discuss the importance of “security themed messaging” around the film’s release.

Indeed, the CDC had a major role in organising and exploiting the PR around the film’s release. They engaged in a tweet-a-thon, participated in various discussion panels and did endless media interviews, including some of the people who spoke with Kate Winslet being interviewed about what it was like to talk to Kate Winslet.

Behind the scenes they were hoping for a September release, so their tie-in promotional events would coincide with the 10th anniversary of 9/11 and the post-9/11 anthrax attacks. Internal emails discussed how to exploit the film’s release, and contain numerous mentions of preparing messaging commemorating 9/11 alongside the messaging about the film’s release.

One email from a communications specialist emphasised, “The movie release comes at a time as the nation prepares to observe the 10th anniversary of 9/11 and the anthrax attacks, as well as recognizing the month of September as National Emergency Preparedness month. Therefore, it is anticipated that there will be a significant level of public and media interest in CDC’s role and mission in responding to public health emergencies involving emerging and re-emerging diseases, as well as other disaster responses.”

Likewise, another email discussing the timeline for the CDC’s PR rollout notes that if some events didn’t take place until a couple of weeks after the 9/11 anniversary that “this is getting to the Anthrax time which may become part of the conversation.”

Evidently, they understood the movie’s power to scare the public, remind them of 9/11 and the post-9/11 anthrax attacks and that the CDC would benefit from this in terms of budgets, image and respect.  While we might expect this sort of cynicism from the military or the CIA, to find this mentality in the PR offices of a public health agency is troubling.

In the end, the CDC got what they wanted. The film came out in early September 2011, a couple of days before the 10th anniversary of the 9/11 attacks, and was in cinemas throughout ‘Anthrax time’.

It had the desired effect, as within days of the movie’s release CDC officials were asked about the scenario depicted in ‘Contagion’ by Senate appropriations staff for State and Foreign Ops. As an email outlines, “Prompted by the movie ‘Contagion’, (mostly Republican) Senators are concerned with whether we are spending enough on pandemic prevention.” The email goes on to describe the Senators’ predictable request, “They would like to have us provide (in writing and in briefing) clear global health impacts if cuts are made.”

In the decade since then, the CDC’s budget has continued its steady rise and their workforce has increased by 12 percent. As an analysis by Chris Edwards of think tank the CATO Institute found, “The largest employment increase was in “Global Health,” a group that monitors foreign outbreaks of infectious disease. The group’s employment jumped from 272 in 2010 to 1,263 in 2019.”

While we obviously cannot attribute all of this 464% increase in staff monitoring foreign outbreaks to the propaganda power of ‘Contagion’, the movie surely helped put the CDC and in particular infectious disease pandemics on the map, both politically and culturally.

All of which leaves us with some sticky questions.  With all these budget and staffing increases, how were the CDC unable to predict or pre-empt the novel coronavirus pandemic? Were they so busy making the public aware of the threat from viral diseases, and of their own heroic role in tackling such diseases, that they dropped the ball? Were they more concerned with generating positive PR for how they would deal with such a scenario than they were with reality?