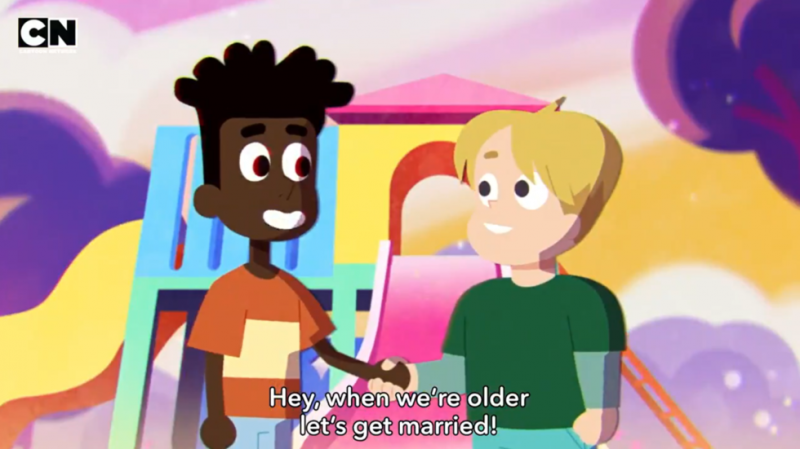 “You can’t get married … Black people can’t marry white people!” a cartoon bully says to the two young boys of different races, who are discussing the prospect of marrying when they grow up. A character from the show ‘Steven Universe’ then appears onscreen and outright says, “Kids! Don’t be racist!”

The scene is then revealed to have been a filming set for an ‘actual’ PSA, and the three child actors discuss the real-life implications of racism. “…It hurts to deal with racism, and when people act like it’s not real, it makes it even worse,” says the only black child in the group.

Along with the video, Cartoon Network included a link to its ‘Be Anti-Racist’ campaign’s page, with the alliterating slogan “Don’t Deny it, Defy it” (presumably with regards to racism). The remaining three PSAs will feature different ‘Steven Universe’ characters, the company said, and will be rolled out over the next couple of months.

The arguably blunt PC messaging prompted outrage online, with users calling it “cringe,” or outright refusing to believe it was part of a serious anti-bigotry effort.

Cartoon Network was also slammed specifically for using child characters in the video, with users saying that racism might be too heavy a topic for real-life children to comprehend. “How about we stop talking about race?” one commenter pleaded with the network.

Other commenters thought that, despite it coming from a pro-gay place, characters explicitly talking about their sexuality might have been out of place for a cartoon aimed at kids.

Overall, viewers seemed to agree with the video’s espoused sentiments, but were uncomfortable with strong political topics being brought up before the target kid audience, especially in a straightforward “on the nose” way.

Another group of users, however, disagreed with the critics, arguing that it might “it be a real relief to a lot of children” to be represented in the media along with their concerns, which might often go unseen in the mainstream. “I cannot understand how you can have any type of problem with this unless you’re racist,” one commenter even tweeted.