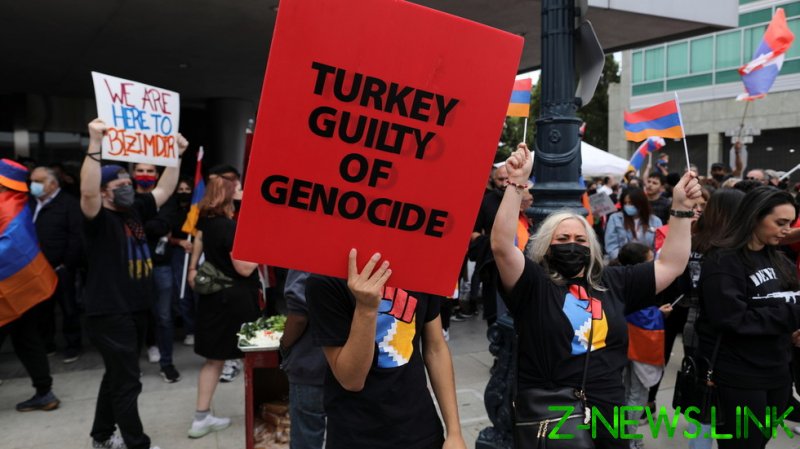 Ankara minced no words, as it took aim at Biden’s decision to recognize the Armenian Genocide on Saturday. The Turkish Foreign Ministry argued that the move would only inflame the simmering tensions in the region.

“After more than a hundred years of this past suffering, instead of exerting sincere efforts to completely heal the wounds of the past and build the future together in our region, the US President’s statement will not yield any results other than polarizing the nations and hindering peace and stability in our region,” the ministry said.

It went on to argue that the US leader should have no say in the regional matters, citing Ankara’s own proposal for Armenia to set up a joint history commision to investigate the century-old events.

Marking the Armenian Remembrance Day on Saturday, Biden became the first US leader to refer to the massacre of ethnic Armenians in the final years of the Ottoman Empire as “genocide.”

Starting from 1915, an estimated 1.5 million people were killed or deported by the Young Turks movement as it was reshaping the crumbling empire. Turkey has been fighting for more than a century against the use of the world “genocide” to describe those events, insisting that the Armenians weren’t cleansed on ethnic grounds, but only resettled.

Relations between Ankara and Washington have already been strained in recent years over a long list of issues, including the US pressure on Turkey to give up Russian-made S-400 missile systems, the US support of Kurdish militias in Syria, deemed terrorists by Turkey, and the US reluctance to hand over exiled cleric, Gulen Fethullah, accused of masterminding a failed military coup in Turkey in 2016.

Turkish President, Recep Tayyip Erdogan, didn’t specifically address Biden’s recognition of the genocide on Saturday. However, in his letter to the Armenian patriarch in Istanbul, he pointed out that “nobody benefits” when the events of 1915 are “being politicized by third parties and becoming an instrument of interference in our country.”

“I commemorate with respect the Ottoman Armenians, who have lost their lives in the difficult conditions of World War I, and I extend my condolences to their grandchildren,” Erdogan wrote.

The Turkish leader said that after the settlement of the Nagorno-Karabakh dispute, Ankara was ready to develop relationships with Armenia.

Turkey has supported its ally, Azerbaijan, in the conflict with Armenia over the disputed Nagorno-Karabakh region last autumn. More than a month of heavy fighting ended with the Russia-brokered truce, according to which large areas were handed over to Azeri control.

This “unacceptable” decision will hamper and complicate cooperation tendencies in the region, Aliyev told Erdogan on the phone, according to his press-service.

The reaction from Yerevan was a complete opposite, with Armenian Prime Minister, Nikol Pashinyan, praising Biden for making a “powerful step on the way to acknowledging the truth, historical justice.”

The “principle position” of the US leader has provided an “invaluable support” for the descendants of the victims of the 1915 events, he added.

“The process of recognition of the Armenian genocide in the US has reached its goal,” Pashinyan pointed out, reminding that the US House and Senate already passed resolutions acknowledging it in 2019.

“The recognition of the Armenian genocide by the US is a much-needed message to the international community, which comes to reaffirm the primacy of human rights and values in international relations,” the PM wrote.