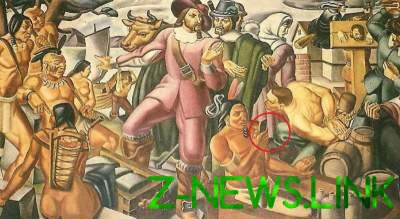 This is not isolated cases.

Recently the painting of 1937, “Mr. Pynchon and the settlement of Springfield” I noticed the object suspiciously similar to a smartphone, and someone even believed in time travel. We offer you to figure out what this thing actually can affect the two blades, where one can see “gadgets”.

A painting by the Italian artist Umberto Romano depicts a scene from the XVII century — before the invention of smartphones is still 400 years. The protagonist of paintings by the Englishman William Pynchon, a successful fur trader and a founder of the settlement of Springfield. It is surrounded by Indians, one of them holding a mysterious object in the same manner as we now hold smartphones.

Fragment “Mr. Pynchon and the settlement of Springfield”

Umberto Romano died in 1982, and during his life did not comment on the figure of an Indian, so it’s unclear what he holds in his hands. Dr. Margaret Bruchac from the University of Pennsylvania believes that this is an iron plate or a wide blade.

Historian Daniel crone, in an essay about William Pynchon suggested that the mysterious object could be a hand mirror: they were invented and became popular in the seventeenth century, and native Americans became a symbol of wealth and prestige. In addition, it can be assumed that the Indian was holding a prayer book.

The work of Umberto Romano is not the first old picture, on which our contemporaries saw smartphone. In 2016, Apple CEO Tim cook found the iPhone on the canvas by the Dutch artist Pieter de Hooch. “To consider was difficult, but I swear it’s there,” joked cook.

Pieter de Hooch, “the Man hands a letter to the woman in the hall”, the year 1670

Another painting by Pieter de Hooch — “a Young woman receives a letter” — makes finally believe the artist knew about future inventions more than expected in the XVII century.