Home / WORLD / ‘He doesn’t seem right’: Concern for Alexander Povetkin as Russian warrior is knocked out in boxing rematch with Whyte (VIDEO)

‘He doesn’t seem right’: Concern for Alexander Povetkin as Russian warrior is knocked out in boxing rematch with Whyte (VIDEO) 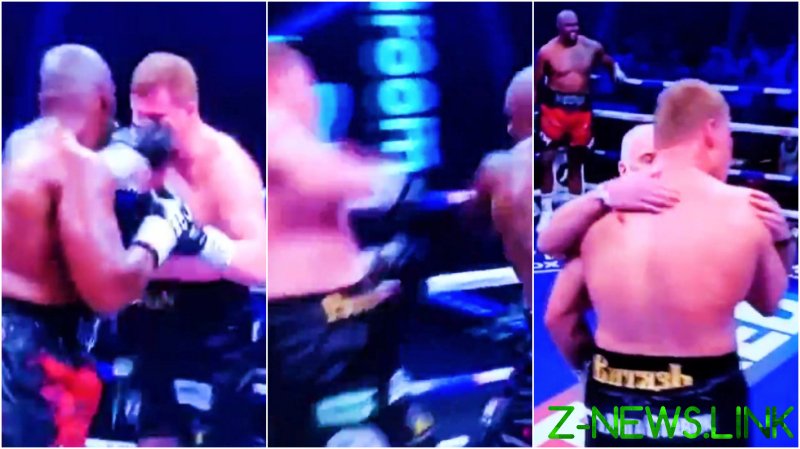 Russian hero Povetkin engaged in a slugfest with Whyte during the high-tempo brief fight, with the unusually ripped-looking Londoner intent on revenge for the shuddering finish that curtailed his title hopes in the fifth round of their first fight in August.

Although he is not known for his showmanship, Povetkin seemed somewhat behind from the outset, with many fans on social media suggesting that he appeared short of his concussive best.

The referee eventually called the fight off with seconds to go in the fourth as a reeling Povetkin absorbed a series of dangerous shots from Whyte, performing admirably to stay on his feet while looking increasingly unsteady before sinking against the ropes.

The result handed durable Povetkin only the second TKO defeat of his celebrated 40-fight career and meant he lost the WBC interim belt he picked up by beating Whyte.

His only previous premature defeat came against a man who also saw off Whyte, losing to multi-belt champion Anthony Joshua in 2018.

At 41, there will be inevitable questions about his future in the sport, as well as talk over whether he was affected by the Covid-19 infection that hospitalized him at the end of last year and delayed the rematch Whyte craved.

“I’m just sad I didn’t get it finished in the first round,” Whyte told Sky Sports afterwards, speaking at the makeshift venue where around 500 fans were allowed to watch under restrictions as a result of the pandemic.

“I could have. I tried, but he’s a tough guy. Obviously you have to be careful because last time I put him down twice, but I thought I could finish it early.”

Many expect Whyte to now turn his attentions to the likes of Joshua, but he is open to a trilogy fight with Povetkin.

“I’m ready to run it back if he wants it again,” he said. “If he wants the rematch… for the right money, I will fight him again because I shouldn’t have lost first time.

“I’m just annoyed: it’s one of those things, I’m mad at myself because I shouldn’t have lost the first time.

“All I had to do was be a bit smarter. I made a silly mistake and I paid for it. From the first round [tonight] I was on to him.

“I was tempted to go hell-for-leather but he’s an Olympic gold medalist, a former world champion and he’s only lost to Joshua and [former champion Wladimir] Klitschko.”