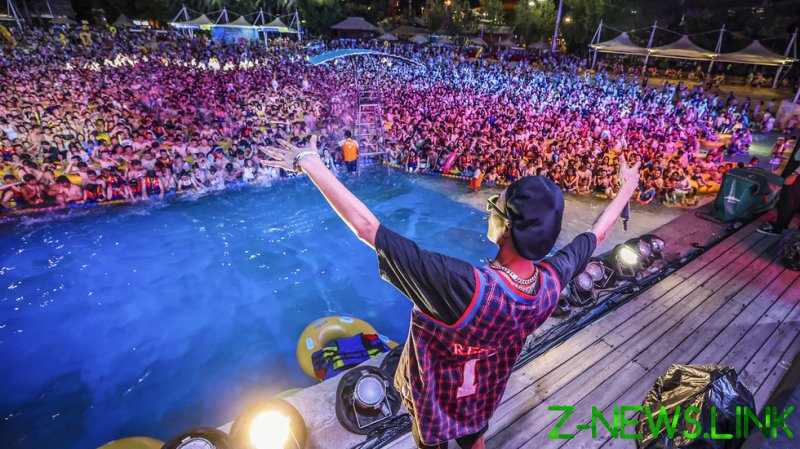 The images from Wuhan, where the virus is believed to have originated, showed partygoers forgoing masks and social distancing guidelines that are still in place in many countries. Footage of the festivities, posted by AFP, quickly went viral, with the news outlet noting that residents had packed the water park as “the city edges back to normal life.” The city was put under strict lockdown, lasting 76 days, when the outbreak began in January. Many said the boisterous scenes from Wuhan gave them hope, arguing that the city had endured harsh restrictions and now appeared to be nearly coronavirus-free.

However, not everyone seemed glad to see normalcy returning to the Chinese metropolis. China’s Global Times observed that there were plenty of “sour grapes” among those who continue to blame China, without evidence, for the global pandemic.

Australia’s Daily Telegraph published the party pics with the provocative, and rather accusatory, caption: “Life’s a beach in Wuhan as world pays virus price.”

Others expressed disgust at the images, alleging that China had “destroyed the world economy” by allowing Covid-19 to spread.

Another party-pooper opined that the “joke’s on them” and that Wuhan would soon see a new surge in coronavirus cases.

Wuhan is the capital of Hubei province, which recorded more than 68,000 of China’s 89,500 reported Covid-19 cases, and accounted for 4,512 of its 4,706 reported deaths, according to a tally kept by Johns Hopkins University. It emerged from lockdown in April but some measures were reintroduced after the city was hit by a second spike in cases.