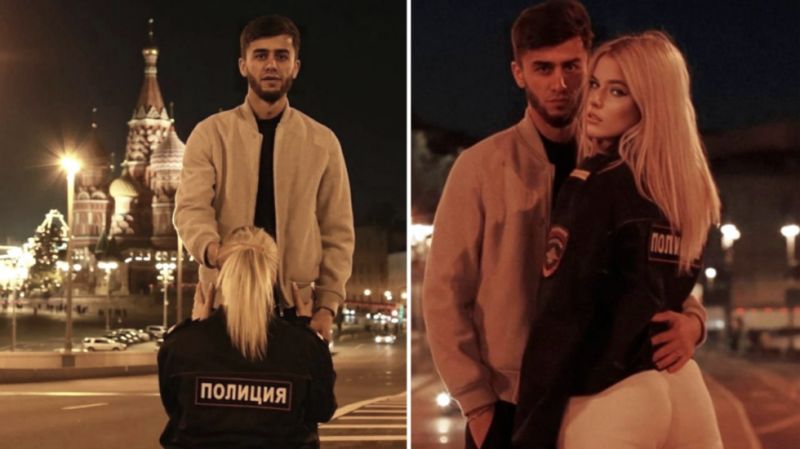 Ruslan Bobiev, a blogger from Tajikistan, released a video on Thursday saying he “apologizes” for the stunt and “will never do it again.” The pictures, posted to his now-deactivated Instagram page, showed him posing in front of the domed St. Basil’s Cathedral, a major landmark in central Moscow.

In the first picture, Bobiev could be seen pouting at the lens alongside a mystery blonde woman. In a second, she could be seen crouching in front of him as he makes awkward eye contact with the camera. The blogger’s companion wore a black jacket emblazoned with the word “police”.

Bobiev, who has previously filmed clips of himself punching an unsuspecting man in the back of the head, and running into trouble with police on the Moscow metro, was detained on Thursday following the incident. Investigators said he had fallen foul of laws around causing offense to the public and committing acts deliberately designed to sow religious division.

Russian mixed-martial-arts fighter Maxim Divnich was among those who slammed the stunt. “For starters, this is disrespecting the people, faith and culture of the country he’s come to,” Divnich said. “Secondly, it’s specifically disrespectful to law enforcement officers.” The fighter branded the social media sensation “an animal in pursuit of popularity.”

Born in Tajikistan, Bobiev is believed to have moved to Russia in order to take up an offer at the country’s prestigious Moscow State University. Prior to deactivating his account, he had over 100,000 subscribers on Instagram.

Later on Friday, Bobiev appeared before a court in the Russian capital where a judge ordered he would be detained for ten days for disobeying the police. He will be deported from Russia at the end of his sentence.