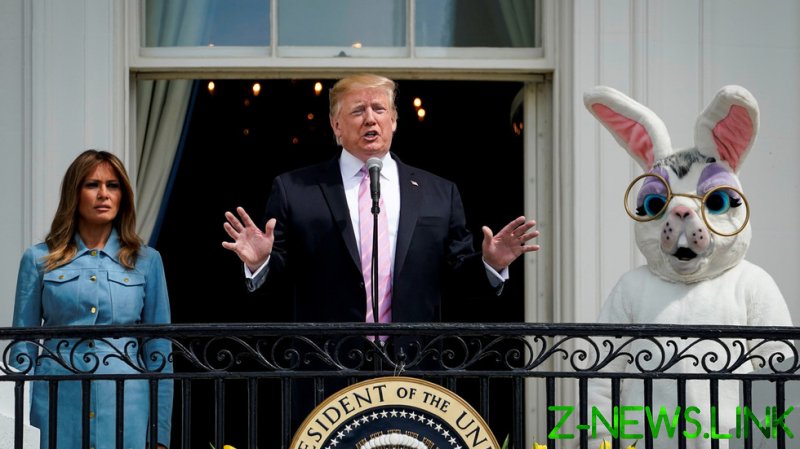 Trump may have been booted from Twitter, but that has not stopped him from releasing public statements to his supporters, many of them carrying the same sarcastic tone his once-prevalent tweets did.

“​Happy Easter to ALL, including the Radical Left CRAZIES who rigged our Presidential Election, and want to destroy our Country!​” he said in a short statement on Sunday.

As with his tweets as president, Trump’s Easter message has sparked plenty of comments, with some posts appreciative of his trolling style and others outraged that he would use a religious holiday to continue pushing election fraud theories.

“Ex President Trump with an Easter Sunday message of resentment and rage,” wrote the Atlantic’s David Frum, adding that Trump has “zero understanding of Christianity.”

Others have taken the statement in a more humorous way.

President Joe Biden, along with First Lady Jill Biden, also released an Easter statement, though one radically different from Trump’s. The president focused on the Covid-19 pandemic and urged Americans to get vaccinated, calling it a “moral obligation.”

“We share the sentiments of Pope Francis,” he said. “Getting vaccinated is a moral obligation. One that can save your life and the life of others.”

Trump’s Easter message is similar in tone to a statement released on Friday, in which he slammed the media for its coverage of his allegations of election fraud.

“Sadly, there was massive fraud in the 2020 Presidential Election, and many very angry people understand that,” he said. “With each passing day, and unfortunately for the Radical Left CRAZIES, more and more facts are coming out. Other than that, Happy Easter!”

In another recent public statement, Trump also called for a boycott of the Major Baseball League for its decision to move their All-Star Game out of Atlanta, Georgia in protest over a new controversial voting law which Democrats have claimed promotes voter suppression.

Trump didn’t appear to just be raging against his critics on Easter, though, as former campaign adviser Jason Miller tweeted that the former president and first lady attended an Easter service in Palm Beach Gardens, Florida.