Home / WORLD / Happily ever after? Electing Biden won’t make protesters’ problems disappear, but it might make them even angrier

Happily ever after? Electing Biden won’t make protesters’ problems disappear, but it might make them even angrier 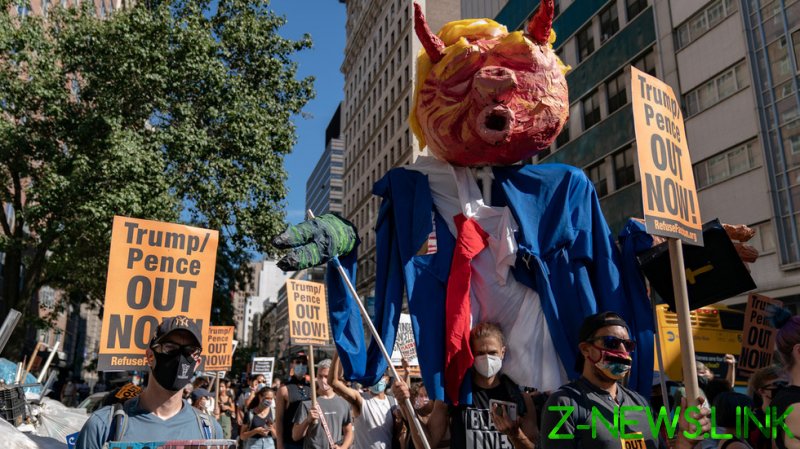 The anti-Trump protest movement – which began in November 2016 before the president was even in office and climaxed in violent unrest as the Covid-19 recession collided with outrage over George Floyd’s death under a Minneapolis policeman’s knee – appears to be very close to achieving its nominal goal as of Thursday. Polls show Democratic challenger Joe Biden leading Trump in most swing states, and most establishment media outlets are giving him comfortable odds of winning.

However, even if all these predictions are correct, and pollsters aren’t making the “mistakes” that led them to falsely declare Democrat Hillary Clinton the victor in 2016, a Biden presidency will be bogged down from day one with major problems. The protesters’ apparent goals – fixing the social issues that brought them out into the streets in the first place, issues they have been led to believe are Trump’s fault – will not be achieved by electing a status-quo neoliberal Democrat like Biden. Such an outcome might even hurt those goals.

The Americans thronging the streets to demand the removal of Trump (and the police, and newly-appointed Supreme Court Justice Amy Coney Barrett, and so on) may be laboring under the delusion that Biden – a career Democrat who used to boast about “prostituting” himself to special interest groups – plans to govern as a progressive despite his record. But once the honeymoon period is over and they realize Biden has no intention of changing things, many will be getting mad.

Biden has pledged to veto “Medicare for All,” the universal healthcare program that is one of the most popular issues on the Left. While the program is supported by 87 percent of Democrats, it is blocked from inclusion in the party’s 2020 platform thanks to its senior members’ colluding with the insurance industry to craft the Obamacare legislation that failed to deliver universal healthcare the last time Biden was in office. If anything, the candidate’s views on healthcare are closer to Trump’s than to Democratic Socialist Bernie Sanders, who has nevertheless risked his life as a 79-year-old amid the Covid-19 pandemic to stump for Biden.

Progressive hero[in]es like Sanders and New York congresswoman Alexandria Ocasio-Cortez have urged the former Vice President to “appoint progressive leaders” to ensure the passage of the legislation they’re dangling in front of voters like the proverbial carrot, hoping that some familiar faces in the cabinet will keep leftist voters from straying or staying home. Will this compensate for failing to speak out on issues voters consider important?

After all, there are more than a few issues on which Biden diverges from the liberal wing of his party, never mind the protesters and rioters demanding Trump be purged. The candidate has struggled to find a balance on the “defund the police” issue, vacillating wildly as polls showed black voters (a contingent Democrats need desperately if they hope to win) supported maintaining current levels of policing two months ago. As rioters have physically attacked men (and women) in uniform, Biden has attempted to express solidarity without alienating the cops – ultimately upsetting both groups.

Democratic leaders have attempted to pin widespread street violence in US cities on Trump, suggesting the unrest will dry up and blow away once Biden is elected as the social issues driving people to destroy their own neighborhoods vanish. But Biden and his running mate, California Senator Kamala Harris, have made it clear they intend not only to keep those social issues at peak dysfunction – they might just make them worse.

Biden has all but promised to follow in the footsteps of New York Governor Andrew Cuomo and California Governor Gavin Newsom, who both clamped down tightly on residents’ movements while rewarding rioters by letting them run wild and loot in spite of curfews. But even the most smash-happy rioter needs to eat, and many of the liberals who’ve joined BLM protests are on the streets because they’re among the almost-half of the US labor force who’ve lost their jobs since the pandemic-related economic shutdowns began. Biden’s demands for a nationwide Covid-19 lockdown are unlikely to sit well with a working class who aren’t working, especially with the unemployment benefits attached to the CARES Act bailout having expired months ago.

And Biden’s definitely not interested in following the Democratic Party’s youthful standard-bearers down the Green New Deal rabbit-hole. While Ocasio-Cortez suggested his refusal to even ban fracking (let alone adopt the GND wholesale) wouldn’t hurt his support among young voters, fracking – unlike much of the GND – is a real-time, concrete issue, its byproducts often poisoning water supplies and causing disease. Even the most silver-tongued politician cannot turn poisoned tap water into wine.

Angry liberals who genuinely believe Trump is responsible for their problems are in for a rude awakening in January 2021 if Biden wins the election. They’ve had plenty of warning – from the vast majority of US oligarchs lining up behind Biden to the candidate’s public promise of a “dark winter” for the nation, to Big Tech’s full frontal assault on all speech criticizing the candidate and his family’s questionable connections to criminal elements. But many have played ostrich with their heads in the sand, and the bait and switch awaiting them in January will make the revelation that Barack Obama was just George W. Bush (turning two wars into seven, bailing out Wall Street, and starving the American worker) in a black-man suit look like Happily Ever After.

It’s not that those silver-tongued politicians and their pet media outlets won’t try to present Biden’s status-quo revivalism as long-desired, fundamental change. Trump is even helping them, bafflingly attacking the candidate and his running mate as “radical leftists” even though both have more in common with lock-em-all-up law-and-order Republicans than what most other countries would consider the “left.” But with resources rapidly running out across the US – rumors of food shortages have surged since the beginning of the year, especially as agricultural authorities suicidally advised farmers to cull their herds, and the threat of mass eviction looming, no amount of inventive blame-shifting will stop the empty-bellied hordes from rising up. At that point, their only hope is to convince the rioters to eat them last, and (spoiler alert!) “Orange Man Bad” isn’t going to fly in February.