Guests can find at the same time in France and Switzerland 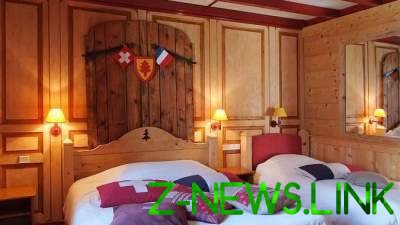 A fancy hotel on the border of the countries.

One half of the hotel Arbez is located in France and one in Switzerland. Almost 170 years ago these countries were in negotiations on the demarcation of borders.

Under the agreement, all existing buildings had to be preserved intact. But until a final decision was reached, some enterprising Frenchman built a three-storey building in two countries simultaneously. To conduct business from here and there.

First it was the grocery store (half Swiss) and bar (French half), and currently, the entire building became a hotel. The state boundary runs through the kitchen, dining room, main hall and some rooms. In the room for the newlyweds the demarcation line is passing exactly in the center of the bed. Similarly, shares one of the bathrooms. Fortunately, if the middle of the night need to get up and go to the toilet, do not need to show anyone your passport.

When France was occupied during the Second world war, the Germans had the right to stay in the French part, but they were forbidden to go to Swiss territory. Stairs to the upper floor was begun in France, but rooms on the higher floors – it was already in Switzerland.

It is logical that the hotel has a restaurant serving national cuisines of the two countries.

Arbez in the surroundings you can go skiing or simply take a stroll and breathe in the clean mountain air.