GPU is employees of the NABU for the delivery of suspicions 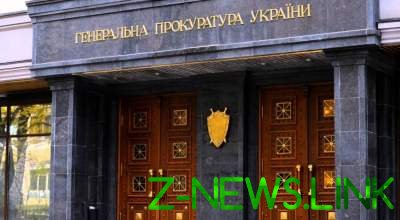 Both suspects are accused of the incident with the “strip the wire” at the building pad.

The Prosecutor General’s office is calling for two officers of the National anti-corruption Bureau for the presentation of reports of suspicion.

Reported may 3, the press Secretary of the Prosecutor General Larisa Sargan.

“The Prosecutor General’s office performed procedural management in criminal proceedings against employees of the NABU A. Serbin and D. zamotayev who won. These individuals are suspected of illegal acquisition of a vehicle, combined with threats of physical violence and abuse of power by law enforcement officials,” she notes.

Actions suspects qualified under part 3 of article 289, part 2 of article 365 of the criminal code of Ukraine.

According to Sarhan, the GPU with 21.03.2019 for 26.04.2019 caused subpoenas Serbina and zamotayev who won the award for suspicion, the Declaration of completion of pre-trial investigation and provide access to materials of criminal proceedings, however, suspects the calls to the GPU ignored.

Thus, the GPU re-calling Serbina and zamotayev who won on may 3 at St Reznitskaya, 13/15.

“At the same time, investigators of the Central apparatus of the RRG by agreement of the Prosecutor sent the petition to the court to drive the suspects Serbina and zamotayev who won the GPU for the delivery of suspicions, the announcement of the preliminary investigation and provide access to materials of criminal proceedings,” – said the Gar.

She said that both suspects were involved in the incident with the “strip the wire” the building of Specialized anti-corruption Prosecutor’s office in September 2018.