Home / WORLD / Get ready for the ‘Hot Vax Summer’, as the newly vaccinated plan to celebrate their lockdown liberations with free love

Get ready for the ‘Hot Vax Summer’, as the newly vaccinated plan to celebrate their lockdown liberations with free love 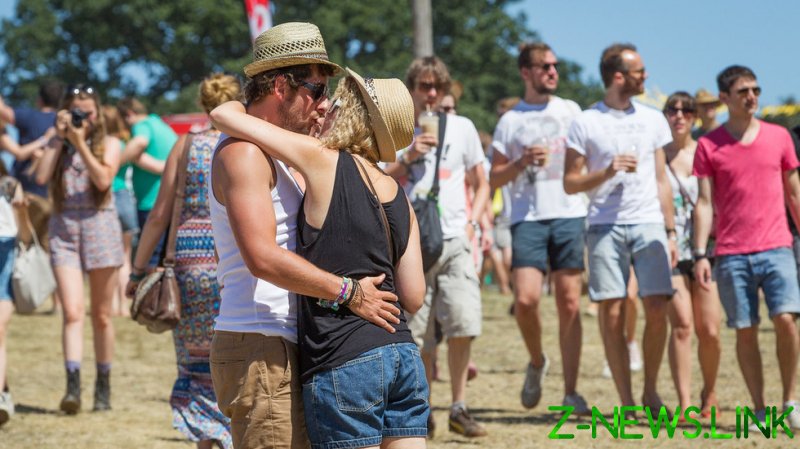 In June 2020, it slowly began dawning on all of us that the quarantine was going to last a lot longer than we originally expected, and that it would be months before a vaccine arrived. As such, me and my single friends all asked ourselves the same important question – are we not going to be able to have sex for at least a year?

I responded to this harrowing prospect by shacking up with the first guy I met on Hinge (a dating app) who knew how to use a fork and seemed to conform to some basic hygiene standards (we’re now in a serious relationship so, thanks, corona!). Others, understandably, felt that going on any dates at all was way too risky, and resigned themselves to an indeterminate sentence of celibacy. For many of these long-suffering souls, relief may finally be on the way in the form of the Hot Vax Summer.

An obvious play on ‘Hot Girl Summer’ – the 2019 meme that celebrated a woman’s right to lushly enjoy the warmest season – ‘Hot Vax Summer’ suggests that the coming months will be a sweaty stage for fully-vaccinated people fornicating like rabbits. It will be lit. It will be like Sodom and Gomorrah all over again and, this time, God is not invited to the party.

“Hot vax summer will be the collective rediscovery of the joys of human interaction and touch. It’ll be the release of internalized anxieties, stress and frustration,” Prishita Maheshwari-Aplin, a trustee at Voices4 London and the politics editor at Bricks magazine, told the Guardian, in an article headlined: ‘So. Much. Sex’: a beginner’s guide to the ‘hot vax summer’.

I am all for this. While I may be in a committed relationship, I am genuinely thrilled for my single friends, and it is with only a tinge of jealousy that I squeeze their hands, look deeply into their eyes, and ask them to “ho’ on the down lo’” on my behalf.

Rachel Wright, a relationship, sex and mental health therapist in New York, expects people to have a lot of casual sex, and thinks that many relationships will be redefined. “Folks are already starting to get back on [dating] apps stating that they’re half-vaxxed, with the date they’ll be fully vaccinated,” she told the Guardian. She recommends saying something like: “I’ve been vaccinated, and it’s important to me that anyone I’m going to be intimate with is too. What’s your vaccination status?”

But wait! Not everyone thinks that our long-awaited liberation will lend itself to widespread promiscuity. Sameera Sullivan, an elite dating coach and matchmaker based in New York, believes people will be more eager to settle down than live it up now that the pandemic seems to finally be coming to a close.

“Spending more than a year alone indoors without much social interaction made many people realize how important it is to have a life partner,” Sullivan told me. “My business picked up considerably in April. People have had a lot of time to reflect on what they want and are now ready to aggressively pursue their relationship goals.”

Similarly, Hinge CEO Justin McLeod recently told BusinessInsider.com that their surveys indicate that around a third of their users are more eager to find a longtime partner and around half of them are actively looking for one.

“I do think for a lot of people who maybe have been dating for a while and then went through the pandemic and went through it alone, they’re feeling the need for, I think, a partner and companionship more than ever,” he said.

Liz, 40, an IT specialist living in Brooklyn, is not going to be following that path right now. She met someone special on a video game streaming service about a year ago, and their friendship soon developed into an online “flirtship.” Now that she’s fully vaccinated, she’s looking forward to meeting her virtual companion in person and seeing if it develops into something serious, but she also wants to keep her options open this summer.

“I hope I get to meet the boy soon,” she said. “But I also want to go out and meet new people. I’m not holding my breath on anyone.”

The desire to be in a relationship and be single at the same time is a universal one, and this ageless dilemma will probably only become more prominent as we emerge from quarantine. Even I wonder whether or not my boyfriend and I will find ourselves secretly envying the singletons that we sort of pitied in our smug pandemic bunker, back when we wrapped ourselves up in a slanket and vowed to at least stay together until this thing was over.

We used to pat ourselves on the back for getting together in spite of the pandemic; now we joke that we got together because of it. Who knows? Perhaps, under normal circumstances, it would have been one of those classic New York first dates that never develops into a second date for no particular reason at all. Perhaps we wouldn’t have had as much of a reason to work through issues. Perhaps it took a global virus to get two commitment phobes to settle down.

What will it be like once we leave our warm bunker and have to face what the other’s ‘Party Persona’ is like? What will happen once the unknown variable that is ‘Other People’ gets involved? Can we survive the Hot Vax Summer?

I guess we’ll find out. But, for now, I’m very happy to be writing the last installment in what my friends jokingly refer to as my Pandemic Carrie Bradshaw series. And, one way or another, I can’t wait to put down my laptop, sip my martini, and listen to the sounds of revelry outside once more.