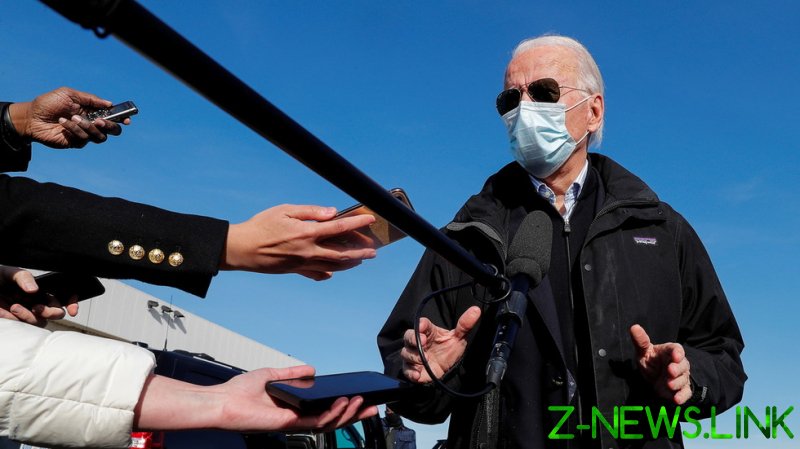 The return of a clapped-out career politician to the White House has the mainstream media squealing with delight. Their liberal bias hasn’t exactly been a secret these last four years (“fiery but mostly peaceful” Black Lives Matter protests vs. the “extremist insurrection” on Capitol Hill being the latest example), but their outpouring of emotion over Biden’s inauguration would make even a North Korean news anchor blush.

“Those lights that are just shooting out from the Lincoln Memorial, along the reflecting pool, it’s almost like extensions of Joe Biden’s arms embracing America,” CNN political director David Chalian gushed on Tuesday, describing a pre-inauguration Covid-19 remembrance ceremony attended by the incoming president.

Reporters who weren’t openly professing their devotion to Joe were busy holding the new administration to account with hard-hitting journalism: by probing Kamala Harris’ choice of shoes, Joe Biden’s love of ice cream (tell us which flavor you got Joe!), and the new administration’s inauguration party playlist.

We get it. It’s embarrassing as hell. But we get it. You spent four years howling at Trump, calling him every name under the sun and lurching from one jumped-up scandal to the next. Russia. Impeachment. Pussy-grabbing and travel bans. You’ve worked extra hard to hold Trump’s feet to the fire every single day, and you deserve a vacation.

Biden’s cheerleaders can be forgiven their victory lap on inauguration day. But Biden will be in charge for four years. If the media can’t be bothered to hound him like they did Trump, his administration will have carte blanche to impose whatever agenda it wants, while the press returns to its Obama-era cooing and mooing. How many Americans think Barack Obama’s tenure was “scandal free” despite seven foreign wars, the crushing of whistleblowers, gun-running and political spying? A significant number likely still do because the media was willingly asleep at the wheel for eight years.

And that’s the optimistic take. An infinitely more dangerous –and equally realistic– prediction is that the media will become a PR shop for the national security state.

Make no mistake about it, domestic repression is coming. The Capitol Hill riot has been milked for all its worth. Those who took part in what essentially was a goofy game of right-wing dress-up have been labeled “domestic terrorists” by Biden, with the mainstream media extending that description to Trump’s supporters as a whole. Trump’s 75 million voters have been described in the media as ”white supremacists” and “cult members” who need to be “deprogrammed” and placed in “re-education camps,” while the MAGA movement itself has been painted as a cancer that needs to be “cleansed” from public life.

Biden, the Democratic Party, the Bush-era ghouls still filling guest slots on anti-Trump TV networks, and now liberal journalists are all in agreement on the need for a domestic PATRIOT Act (although, surprisingly, ‘The Squad’ have objected to this). Reporter Glenn Greeenwald catalogued the calls for authoritarianism in a recent blog post, with some notable examples including the Daily Beast (already essentially a laundry for CIA press releases) demanding a new domestic spy agency to stop the “white terror,” and a former intelligence official suggesting Trump supporters be given the “Al Qaeda” treatment.

With the aid of the press, the repression will be sold as a righteous crusade against the forces of racism, extremism, and white supremacy. However, with the benchmark for “extremism” set at “rowdy Trump supporters,” the state and its allies in Silicon Valley will simply criminalize dissent from the right and prevent the next Trump-style challenge to their power.

They’re not actually looking for the next Timothy McVeigh. They just want Americans to view their flag-flying, gun-owning, Trump-voting neighbors as potential McVeighs and treat them accordingly.

And when the surveillance net falls on middle America, they’d much rather the public tune out, turn on the TV, and hear the latest update on just how great Kamala Harris’ fashion sense is.