Home / WORLD / Get a vaccine passport or you could end up killing someone somewhere. Do you want that on your conscience?

Get a vaccine passport or you could end up killing someone somewhere. Do you want that on your conscience? 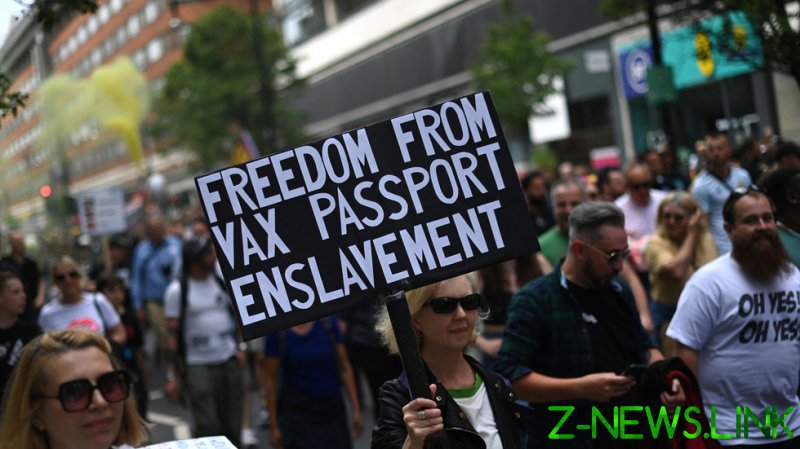 ‘Crossing the Rubicon’ is the curious phrase adopted by many vaccine passport opponents. It means making a decision that has irreversible consequences. And that’s how some see governments’ decisions to implement health passes or QR codes in relation to Covid-19 jabs.

In France, President Emmanuel Macron has fully embraced the idea, with bars, restaurants, cinemas, gyms, swimming pools, museums, shopping centres and more accessible only to those over the age of 12 from July 21 if they have an approved health pass.

Prime Minister Boris Johnson is also moving in that direction in Britain, stating, “If sufficient measures are not taken to limit infection, the government will consider mandating the NHS Covid Pass in certain venues at a later date.”

This direction of travel has raised the hackles of passport opponents. A campaign group, Open For All, has been formed, comprising owners and operators of pubs and entertainment venues that will refuse to check a patron’s Covid-19 status. The Freedom Association is also backing calls to shun passports.

However, this is misguided bluster. Words and phrases such as ‘freedom’, ‘checkpoint society’ and ‘sensitive data’ are being thrown around with impunity, but those pushing that angle have lost perspective.

No fully functioning society has an absence of regulations. When we arrive at an airport, we hand over our passport for scrutiny. At the other end, we provide personal details and agree to abide by the law of the land in exchange for a stamp in the same passport. When we drive a car on the road, the police have a right to ask us to show proof that we’re legally allowed to do so. For those of a certain age, there’s a requirement to prove their date of birth when entering a bar or buying alcohol. So this obsession with complaining about complying with government conditions is irrational.

The lockdown hasn’t been easy for anyone and there’s a great deal of understandable frustration. But the opposition to vaccine passports is immature.

Those who are vociferously leading the protests and creating groups to whip up support have been hoodwinked into believing society is one step away from sinister totalitarianism. Their fears have become paranoia. They should talk to the North to have freedom.

The argument for QR codes and passes is simple. We need to do all we can to stop the spread of Covid-19, as the more it travels and circulates, the more chance we have of variants occurring. The Delta mutation is already causing massive problems, both in the UK and abroad.

Some will counter that the death rate has not been as high as before, even allowing for a surge in Delta cases. So, should we trade a ‘few’ deaths so you can enjoy a meal and some drinks without scanning a code? Would you like to offer up your parents, children or spouse in that sacrifice?

Doctors, nurses and scientists have been working prodigiously to care for the infected and develop vaccines. We are finally inching towards a winning position and need to keep the momentum going. If a variant appears that is resistant to all our current vaccines, then we’re back in full lockdown again, and will be burying tens of thousands.

There’s also the wider view of being a world citizen. The developed world is forging ahead with vaccine rollouts, yet only 12.1% of the global population is fully jabbed. In Kenya, those who’ve received at least one dose comprise a pitiful 2%, and it’s the same in Afghanistan, which looks great compared to the 0.5% in Cameroon. Compare that to Canada (70%), UK (68%), US (55%) and France (53%).

The situation is really quite simple: going to the cinema, for example, without using a vaccine passport could easily cause an undetected transmission, which could then be passed to someone who ends up touching down in one of these nations with low vaccination rates. Do you want to have blood on your hands by playing your part in a single death?

The other illogical aspect to this paranoia about freedom is that it’s based on a fallacy anyway. We’ve all heard enough from whistleblowers such as Edward Snowden to know that phones can be tracked. To think the security services can’t trace us is thoroughly naive. They can listen to our conversations and pore over our emails at will. Our daily lives are captured on CCTV or vehicle dashcams. So, why the uproar about vaccine passports?

Technology is an important tool to help us live in a better, safer society. The Covid-19 passport schemes are an extension of this. They protect you and those around you, including staff who have no option but to work to keep a roof over their head.

What’s the real issue in rebelling against them? It’s about being told what to do and not having the maturity to accept that. But we all live together on this planet and you can’t just have carte blanche to do what you want.

So, have the jab, download the pass, scan the QR code and help the scientists keep the spread of variants down to a minimum. Doing anything else really is crossing the Rubicon, as the one thing our powerful and far-reaching Big Brother technology can’t do is bring someone back to life once Covid-19 has finished them off.