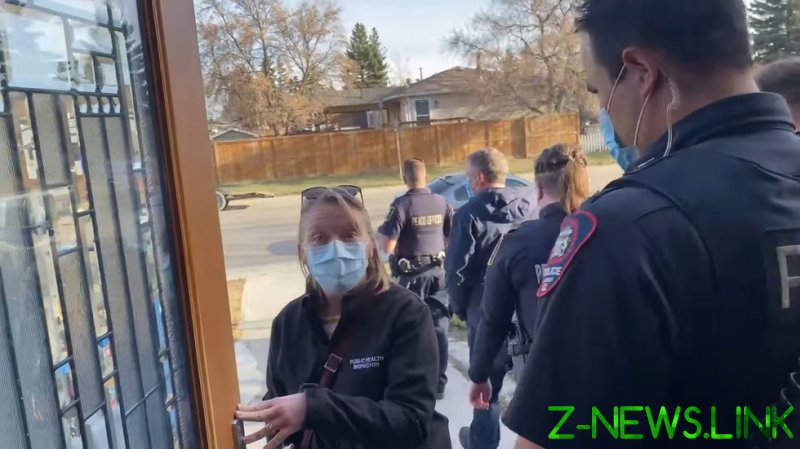 A video of the encounter spreading on social media shows the officers being confronted by a man who is obviously unhappy to see them. “Please, get out, immediately get out of this property,” the cameraman tells them, repeating the same message again and again in an increasingly loud and agitated voice.

The man eventually starts calling the cops “Gestapo” and “Nazis,” ordering them to “Go, and don’t come back without a warrant.” As the officers oblige and walk away, they are chased by more angry calls: “Unbelievable, sick, evil people! Intimidating people in a church during Passover!”

The video was first published by Artur Pawlowski, a controversial Canadian street preacher of Polish origin. He shows his face at the end of the video to express his outrage to viewers.

The conservative pastor is based in Calgary, Alberta, and is known locally for alms-giving work and fiery sermons against the Sharia law, abortions, gay rights and, lately, Covid-19 restrictions. He has repeatedly been fined by the authorities for organizing protests in breach of health regulations currently in place in the country, according to Canadian media. His views have made him a target for criticism from left-wing activists.

Police disrupted another service this Easter, on the other side of the Atlantic. London police raided the Christ the King Polish Roman Catholic Church in Balham, forcing a Good Friday service to be canceled. Video of the incident went viral and sparked condemnations, both in the UK and in other nations.