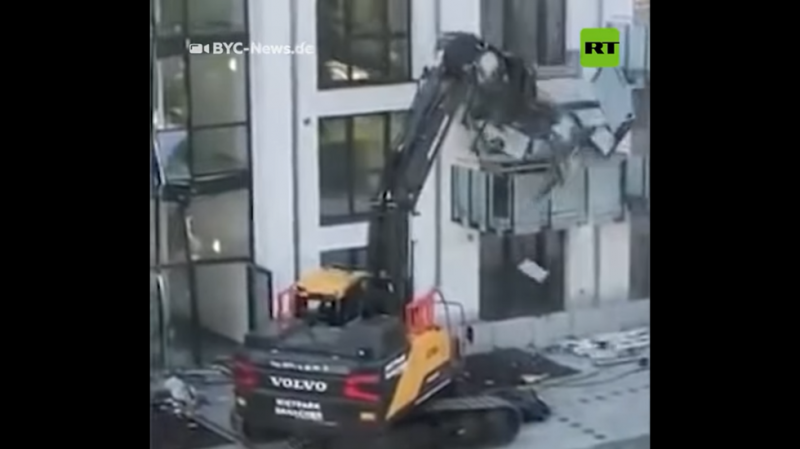 Windows broken, balconies torn down and chunks of concrete everywhere: that’s what was left of a newly-built low-rise apartment complex in the small German town of Blumberg. The would-be residents that were about to move into their brand-new apartments will now have to wait for months until repair works are finished.

The devastation was caused by one single man, who was apparently so enraged over his outstanding invoices that he hopped into an excavator and started meticulously tearing down the façade of a building he himself had helped to build.

Known only as Matija P., the 47-year-old has already been nicknamed “Excavator Rambo” by some German media. He also might face up to five years in prison for his deed, with the German police having opened a criminal case over property damage.

A video of the incident that has been widely shared on social media shows the heavy equipment tearing down the glass balconies and breaking windows of the apartment block as Matija P. dismantles the building’s façade.

The escapade could well have ended badly for the disgruntled worker, as he didn’t stop at vandalizing the apartment block itself, but proceeded to vent his anger at the nearby garages. According to the police, gas cylinders were being stored in the garages and the rampage might have ended up in a big bang.

According to some media reports, the only reason the man stopped destroying property was the fact that his excavator eventually broke – an ending eerily similar to that of the “Killdozer” operated by Marvin Heemeyer – a Colorado man who in 2004 went on a massive rampage over a property dispute – except that the German “Rambo” did not take his own life after the destructive act.

Instead, after taking it out on the building, the builder-turned-vandal got into his car and simply drove away. Later, Matija P. turned himself in and stated that his outburst of anger was caused by some payments that were supposedly wrongly withheld from him.
Reports insist that Matija P. was not drunk or under the influence of drugs. The police also found no reasons to place him in custody.

At least 30 apartments were damaged in Wednesday’s incident, the police said in a statement. The losses inflicted to the building owner amount to around €500,000 ($593,350). Police officers also had to cordon off the area to rule out the possibility of any damage to the gas cylinders.

The property developer, Ingo Fangerow, insists that the contractor had received his due payment. Fangerow admitted, though, that he’d withheld 1.5% of the total sum of around €4 million ($4.75 million) citing some “individual defects” in construction.

Matija P. can hardly hope now to get reimbursed for his efforts. If he doesn’t end up in a German jail, he may well be facing a hefty fine for property damage.