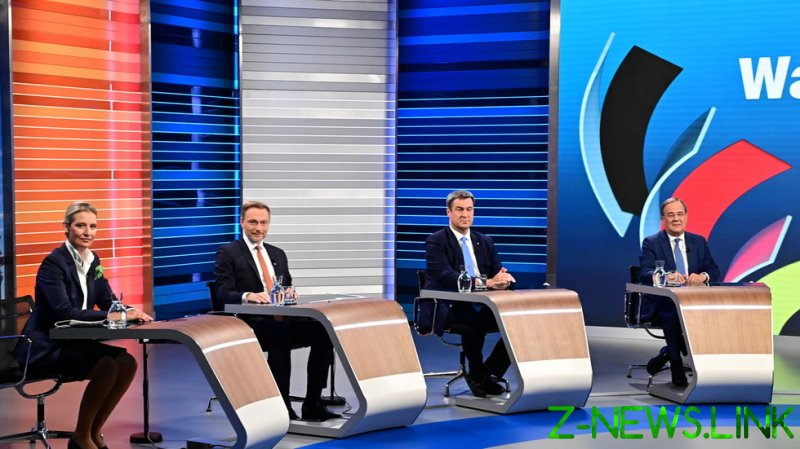 German broadcaster ARD’s Das Erste (‘The First’) television network gave its viewers an unlikely glimpse into the future on Friday, having shown projected results of the historic election that has not yet taken place.

While Germans are only gearing up to elect a new parliament on Sunday, the channel ran a ticker across the bottom of the screen showing the center-left Social Democratic Party (SPD) narrowly beating the conservative alliance of the Christian Democratic Union (CDU) and its Bavarian sister party, the Christian Social Union (CSU). The two main rivals for the seats in the German parliament, the Bundestag, received 22.7% of the vote and 22.1% respectively.

The liberal Free Democratic Party (FDP) came third with 13.2% and, if one is to believe ARD’s soothsayers, was on course to replace the anti-establishment Alternative For Germany (AfD) as the third-largest party in the Bundestag. AfD came up short of its 2017 result in the projection, clinching 10.5%. After showing the Left (Linke) getting around 5% of the vote, the ticker vanished, without displaying the numbers for the Greens as the channel apparently caught on to its blunder.

The ticker appeared during a popular quiz show, and attracted the attention of online observers and lawmakers alike.

Joana Cotar, spokeswoman for digital policy of the AfD parliamentary group, shared the clip on Twitter, advising the channel to “change the numbers” on Sunday so its apparent prior knowledge of the outcome “is not so noticeable.”

Facing mounting questions about its preemptive election call, ARD apologized, claiming that the projections were part of “a test” that “accidentally went on air.”

Still, some were not convinced. “If it was a “test.” Why wasn’t [the word] ‘test’ shown below? And why was it deleted within seconds? Kind of strange,” one skeptic tweeted.

“Why not work with placeholders and ‘zero values,’ dear ARD?” another one quipped.

Some went even further, suggesting that the decision to run a ticker was neither an honest mistake on the part of ARD, nor an unfortunate leak, but a deliberate psy-op to “confuse and demotivate” voters, who might believe that they have no say in the final result.

Sunday’s highly-anticipated election will be the first race in nearly 16 years that won’t feature Germany’s outgoing Chancellor Angela Merkel. Since the long-serving chancellor announced she would not seek reelection in 2018, her CDU party has entered a rough patch, suffering setbacks in regional elections and seeing its popularity slipping amid criticism of the government’s handling of the coronavirus pandemic.