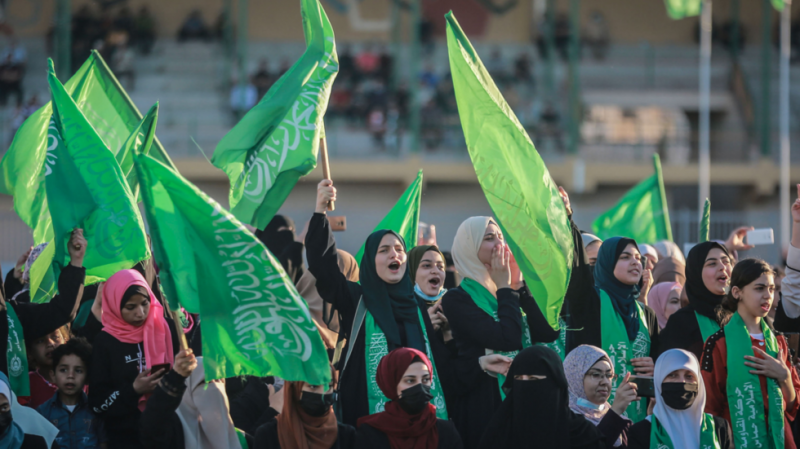 The ban on the Hamas flag was first reported by the Welt am Sonntag newspaper. The outlet cited Thorsten Frei, the deputy parliamentary spokesperson for Angela Merkel’s Christian Democratic Union (CDU) and its sister party, the Christian Social Union (CSU).

The two parties that spearheaded the move have reached a consensus with their parliamentary partner, the center-left Social Democratic Party (SPD), the official said.

“We do not want the flags of terrorist organizations to be waved on German soil,” Frei stated. “I’m very pleased that the SPD has joined our initiative. In doing so, we can send a clear signal to our Jewish citizens.”

The SPD reportedly had constitutional concerns about the move, but those differences were ultimately settled. According to a letter obtained by the newspaper that was sent by Justice Minister Christine Lambrecht (SPD) to Interior Minister Horst Seehofer (CSU), the party believed the initial proposal by the CDU/CSU was “in need of revision”.

While Germany has not designated it as a terrorist group, this was the label the European Union slapped on Hamas in the early 2000s. Berlin had previously taken similar action against other pro-Palestinian and anti-Israel groups.

Back in 2019, for instance, it branded Lebanon-based Hezbollah – both its military and political wings – as a terrorist group and banned the displaying of its flag or the showing of support. Unlike Germany, the EU as a whole designated only the military wing of Hezbollah as a terror group.

The action against the Hamas follows a wave of pro-Palestinian events that swept over Germany back in May, during the two-week conflict between the armed group and Israel. Many of the pro-Palestinian rallies have been marred by assorted incidents, including attacks on synagogues, the burning of Israeli flags, and so on.