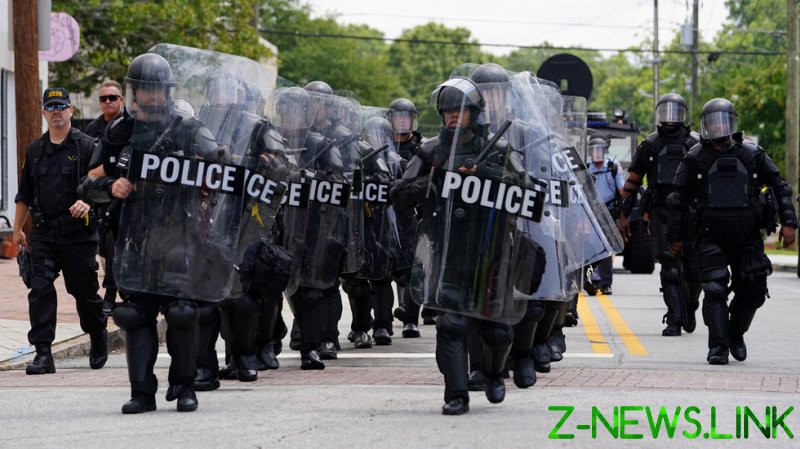 The measure passed the state house 101-69 on Wednesday, with lawmakers largely voting along party lines, aside from three Democrats who joined their rivals across the aisle in supporting the bill. It will now be handed off for further debate in the Georgia Senate, where Republicans hold a 34-22 majority.

If enacted into law, the bill would bar local governments from slashing police budgets by more than 5 percent compared to the previous year, also prohibiting cuts greater than 5 percent over a “rolling ten-year period.” It includes exemptions for localities where revenues are expected to fall by more than 5 percent, permitting proportionate cuts to police departments.

Introduced earlier this month by Republican Rep. Houston Gaines, the measure follows efforts in cities like Atlanta and Athens to defund law enforcement on the heels of a wave of police brutality demonstrations around the country last year. While both cities ultimately rejected the budget cuts, Gaines argued his bill would prevent future attempts, calling police defunding a “dangerous idea” that will “harm those that most need protection.”

“We’ve seen calls to defund the police in Athens and Atlanta, and we can’t let that happen in our state, so this is an important measure that’s going to keep families safe,” Gaines said after the bill passed.

Some Georgia Democrats, however, have insisted the measure will seize local autonomy from cities and counties in violation of the state constitution, with Macon lawmaker James Beverly suggesting it would not hold up in court in the event it passes through the Senate.

“It’s going to go to court, and in the courts, local governments, if they hold the constitution up, they have a fight to say we get to set up our own budget. Y’all can’t do that in the General Assembly,” Beverly said.

A body representing city and county governments around the state, the Association County Commissioners of Georgia (ACCG), made much the same argument before the bill passed, saying it would infringe local control enshrined in the Georgia Constitution.

“Police power is one of our inherent or supplemental powers under the constitution,” said ACCG deputy legislative director Todd Edwards. “We’d like to maintain our flexibility to fund and manage police forces how our local elected officials – those accountable to the public – feel is the best use of taxpayer dollars.”

While the state constitution does guarantee “home rule” for county governments, giving them autonomy to pass and enact “clearly reasonable” measures, the document carves out exceptions in a number of areas where the state legislature may override local laws, including elections, business regulations and the use of eminent domain powers, among others. “Police and fire protection,” however, are left to counties and municipalities.