Home / WORLD / George Galloway: This epic, bitter battle between Salmond and Sturgeon may be a fishy affair, but it has a whole nation hooked 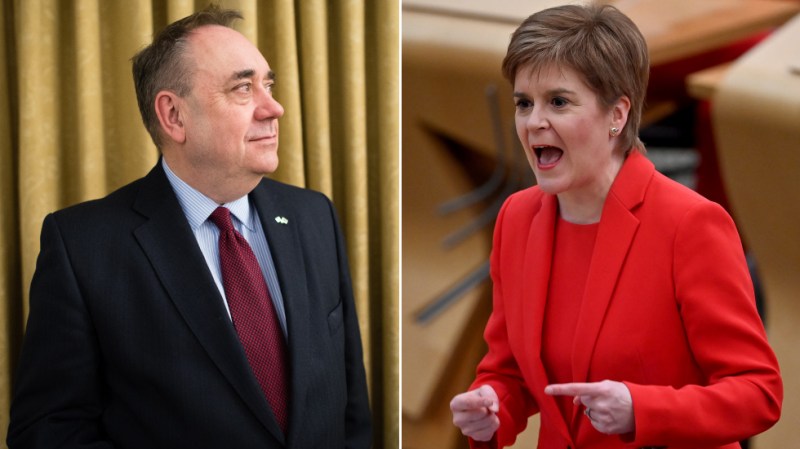 In 1967, the Scotland football team scored its most epic victory over the then World Champions England on their home turf at Wembley. Legendary languid Scottish midfielder Jim Baxter ran the show, most memorably playing ‘keepie-uppie’ with the ball in the midst of the battle, and even, though this is perhaps apocryphal, at one point sitting down on the ball.

Even if you know nothing of football, I hope this story conveys what it was like watching Alex Salmond before the Holyrood’s inquiry into the Scottish government’s handling of the allegations, which turned out to be false, that he was a criminal involved in multiple sexual offences against nine women over many years.

Almost a year ago, as is widely known, Salmond was acquitted of every single charge by a jury comprising mainly women, presided over by a female judge.

Having known the former SNP First Minister of Scotland for over 30 years, I was never in doubt about his innocence, only about his prospects of getting justice. It turns out he has still not received justice.

The people responsible for the biggest frame-up since Roger Rabbit are still deep in the burrows of power in Edinburgh, and hopes that the inquiry would name and shame them out of their positions have so far been dashed. Everything now turns on First Minister Nicola Sturgeon’s counterpoint to Salmond’s virtuoso appearance. She appears later this week.

Already a chorus of cynical coverage has sought to prepare the nation for Sturgeon’s counter-strike. Some of the world’s least likely feminists have been in action, with talk of “the women”, “the victims”, “male privilege”, and so on. This must be said: THERE WERE NO VICTIMS.

The mainly female jury DISBELIEVED all nine women. To know why, you’d have to look at all the evidence, and to know who and what they were, but you will never know that, as they have lifetime anonymity.

Crocodile tears and faux-feminist outrage are entirely misplaced in this case. But that hasn’t stopped them flowing.

Many many millions of pounds and three years of public persecution of Salmond have already been spent, in two cases in two courts, both of which were resoundingly won by Salmond. Still his enemies seek to paint him as the guilty party. And they may yet prevail.

Salmond spent six hours testifying in front of the committee, and languor doesn’t quite describe the forensic ease with which he dealt with his interrogators. He chose not to seek to land any knockout blows, but instead, by attrition, mounted an overwhelming case, by landing one blow after another. Watching, I felt sure he had been right to adopt this approach. The morning after, I’m not so sure.

He might have been better merely to say this: The SNP leadership were petrified that I would return to Holyrood after losing my Westminster seat in 2017. If I had, on the principle that you can’t have two cooks in the kitchen, they feared I would seek the party leadership again. So, they adopted a new workplace safety procedure, without consultation with anyone and at enormous expense, as it turned out to be “unlawful and tainted with bias”.

They made it retrospective, only to catch one fish in their newly bespoke net: me. They might as well have called it Alex’s Law. When the High Court found for me and gave me over half a million pounds for this farrago, they said, never mind, “we will get him” in a criminal case – “we may have lost the battle, but we will win the war.”

They sent telephonic messages to each other evidencing a clear conspiracy to do so, including exhortations by Sturgeon’s husband, the SNP chief executive, to “put pressure on the police”. Nine complainants – some willing, some not – were assembled, and the trial of the century took place. I was acquitted on every charge.

If you are content to allow the people responsible for ALL this to remain in power, I am not. And I call for their immediate resignations.

Although we were thrilled at Jim Baxter’s insouciance back in 1967, the Law-man, the equally legendary Denis Law, was reportedly furious with Slim Jim. Denis was a striker, a goal scorer. He felt that Scottish superiority should have been demonstrated forever in the record books by running up a cricket score (Scotland won 3-2), instead of just memories of brilliance, which would eventually fade.

For a political audience of a certain age, watching Salmond came from somewhere back in our long-ago, when men were men and politicians did what it said on the tin. When Scotland had big beasts and not just people with fishy names. His performance showed the mesmerising power of nostalgia. We will soon find out if nostalgia is still as powerful as what it used to be…