French anti-health pass protesters double in number in a month, at least 250,000 expected to hit streets this weekend – media 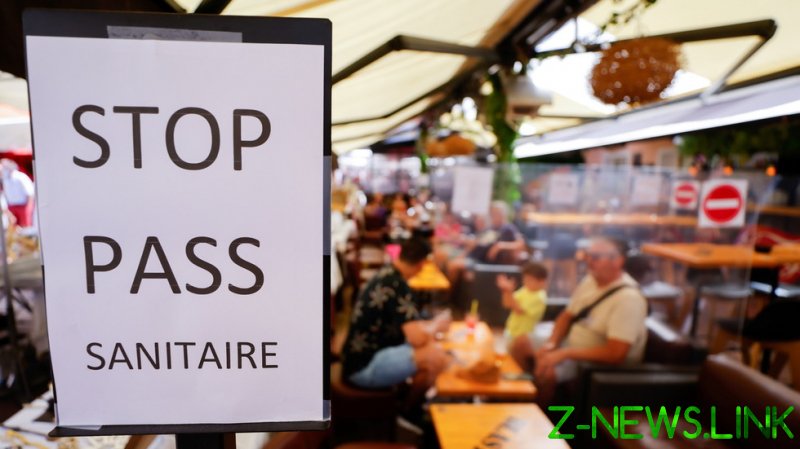 The number of French nationals openly disagreeing with the recent introduction of a so-called ‘health pass’ in the country has doubled since mid-July, with the movement showing no signs of running out of steam, police intelligence services have reportedly warned the government. In a note sent on Thursday, France’s central territorial intelligence said it estimates that at least 250,000 people will rally over the weekend, Franceinfo’s Radio France reports.

Many families are set to participate, intelligence analysis has shown, with parents being “generally fed up” with school closures during the pandemic and uncertain of health rules at educational institutions at the start of the new school year.

Nearly 200 protests have been already planned throughout the country for the weekend, with the anti-health pass movement said to be especially active in the south of France, the intelligence note reportedly warned, calling for further mobilization of law enforcement. While the protests are expected to be peaceful, some “ultras both from the left and right” might join in, authorities said, with “professional agitators” trying to infiltrate and possibly stage provocations.

This week, the country will see its fifth weekend of mass protests condemning the government’s toughening of anti-coronavirus restrictions on the unvaccinated. When the ‘pass sanitaire’ (health pass) to enter certain venues and institutions was introduced in mid-July, around 114,000 people took to the streets during the following weekend, according to official estimates. Last week, the number of protesters climbed to more than 237,000 throughout France, with participants saying the new measures – set to be in place until at least November, offend their personal freedoms – valued in the European country since its 1789 revolution.

Despite the mass resentment, France’s Constitutional Court has approved the use of the controversial pass. Originally required at cultural venues such as cinemas and museums, the vaccine passport has been then made obligatory to visit bars and restaurants, as well as for trains and airplane travel. The court also ruled it constitutional to make the vaccine mandatory for health care workers. Meanwhile, French President Emmanuel Macron this week reiterated his calls for more people to get vaccinated, saying that the health situation in the country is “more than delicate.”

Over 112,000 people have died in France since the start of the Covid-19 pandemic, with almost 6.5 million confirmed cases. More than half of the country’s population has now been fully vaccinated.