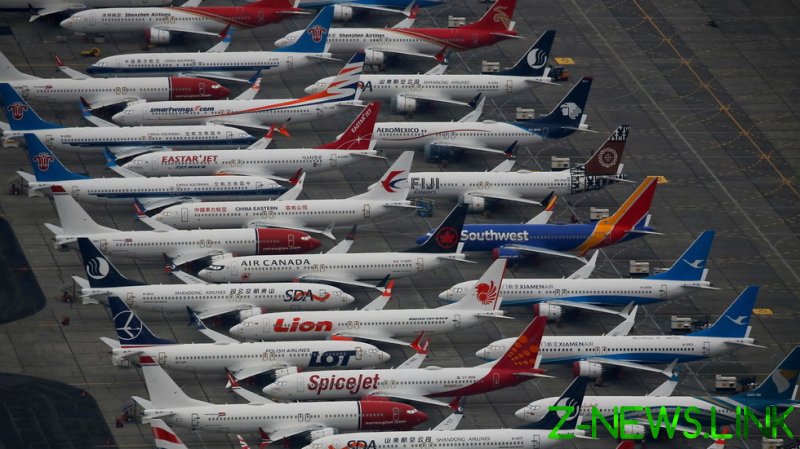 Mark Forkner, 49, a chief technical pilot for the aerospace giant between 2014 and 2018, was charged on Thursday by a federal grand jury, according to the Department of Justice, which claimed he “deceived” the Federal Aviation Administration’s (FAA) Aircraft Evaluation Group about a particular system on the MAX, later determined to have led to a pair of crashes that took hundreds of lives.

“In an attempt to save Boeing money, Forkner allegedly withheld critical information from regulators,” Acting US Attorney Chad said in a statement, adding that the DOJ “will not tolerate fraud – especially in industries where the stakes are so high.”

The department went on to say that the test pilot “abused his position of trust” with the government and provided the FAA with “materially false, inaccurate, and incomplete information” about the 737 MAX’s Maneuvering Characteristics Augmentation System (MCAS).

In a 16-page charging document, the government accused Forkner of deliberately misleading the FAA in order to influence a change to the agency’s pilot training requirements, saying he believed this could help Boeing to save money in negotiations with airlines.

It first emerged that Forkner was on the FAA’s radar after documents leaked to Reuters showed the agency possessed text messages between himself and another pilot in 2019, in which he appeared to admit that he “basically lied to the regulators” about potential issues with the MCAS, though maintained he did so “unknowingly.” At the time, the FAA said the exchange was “concerning” and that it was determining next steps, though the DOJ waited nearly two years before pressing charges on Thursday.

The department invoked other private communications in its indictment, citing an email in which Forkner complained that if the FAA changed its training requirements it would be “thrown squarely on my shoulders,” adding, in the third-person:

It was Mark, yes Mark! Who cost Boeing tens of millions of dollars!

The MCAS was an anti-stall mechanism designed to automatically push the MAX’s nose downward under certain conditions, but a malfunction with the system and Boeing’s failure to inform pilots of its specifics was blamed for causing the crashes of two MAX jets between 2018 and 2019 – one operated by Lion Air and another by Ethiopian Airlines – which claimed a total of 346 lives. All 737 MAX planes were later grounded and put out of service worldwide, pending investigations by US regulators.

An internal probe conducted by the FAA in 2019, however, found that the regulator was far too lax in how it handled testing for the aircraft, and effectively allowed Boeing to perform its own inspections with limited oversight. While the agency claimed that Boeing had failed to notify the government about the MCAS issues, it concluded that greater scrutiny of the multi-billion dollar corporation may have identified the problem.

Boeing was later charged for criminal conspiracy to defraud the government, though was allowed to settle for $2.5 billion – what amounts to a slap on the wrist for the massive company. It paid $243.6 million in criminal penalties and shelled out another $1.77 billion to airlines that purchased the faulty plane, while just $500 million of the settlement was devoted to a fund to help the families of crash victims. Boeing CEO Dennis Muilenburg was also pushed out of the company at the height of the scandal, and while he was denied a major severance package, nonetheless walked away with a cool $60 million in pension benefits and stock.