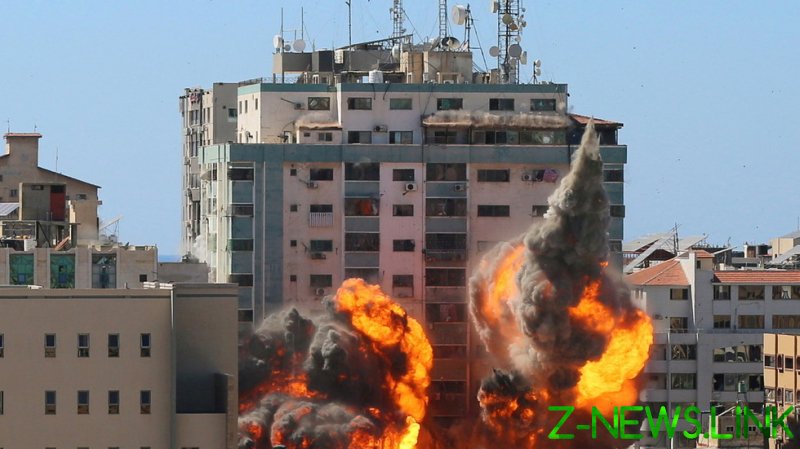 On Saturday, the Israel Defense Forces (IDF) targeted al-Jalaa Tower in Gaza City, a high-rise that housed AP, Al Jazeera and several other media outlets. Israel defended the airstrike, insisting that the tower was used by Hamas and was therefore a legitimate military target.

The claim has come under considerable scrutiny, however. AP said that it had “no indication” that Hamas militants operated out of the building. But this assertion has now been challenged by a former editor at the news outlet.

Matti Friedman, who worked at AP’s Jerusalem bureau from 2006 to 2011, wrote in a series of tweets that while he didn’t have “direct knowledge” of the incident, a source relayed that there was ample intelligence pointing to Hamas’ presence in the building.

“I take army statements like I take foreign press reports – with several grains of salt,” he wrote. “But a conversation with a friend who is intimately familiar with military decision-making right now suggests there were indeed Hamas offices there.”

He further stated that the IDF’s legal advisers were “convinced” that there was solid proof that Hamas had offices in the building, and ultimately decided the strike should go ahead, despite the controversy it would inevitably cause.

“Because hitting press offices is a net negative for Israel, the army seems to have had a target it considered worth the fallout,” he argued.

The Israeli-Canadian journalist also took aim at his former employer, suggesting that AP was “compromised” because it was “operating in a dictatorship” – apparently referring to Hamas-controlled Gaza.

His anonymously sourced claims peeved some on social media, who said that it seemed unwise to trust Israeli intelligence without having independent verification.

Friedman has been similarly critical of AP in the past. In a 2014 essay published in the Atlantic, he accused AP journalists of turning a blind eye to Hamas rocket attacks launched near the agency’s offices. However, he stopped short of claiming that the militant group had offices in AP’s building.

Israel has reportedly shared intelligence it used to justify the strike with Washington, after the US requested more information about the attack. US Secretary of State Antony Blinken said on Tuesday that Israel passed along information it had via “intelligence channels,” but declined to elaborate on the issue.

Meanwhile, the Associated Press’ top editor has called for a probe into the Israeli airstrike. Separately, the media advocacy group Reporters Without Borders urged the International Criminal Court to investigate whether the attack constitutes a war crime.

The controversial bombing occurred amid days of cross-border violence between Gaza militants and Israel. Israel has vowed to continue its strikes until Hamas is neutralized. While the IDF has claimed that its strikes are aimed at wiping out military targets, many have criticized the Israeli operation amid reports of civilian casualties in Gaza.