Home / WORLD / Florida landlord determined to FORCE tenants to get Covid-19 vaccine or be evicted, even as Gov’s office insists it’s ILLEGAL

Florida landlord determined to FORCE tenants to get Covid-19 vaccine or be evicted, even as Gov’s office insists it’s ILLEGAL 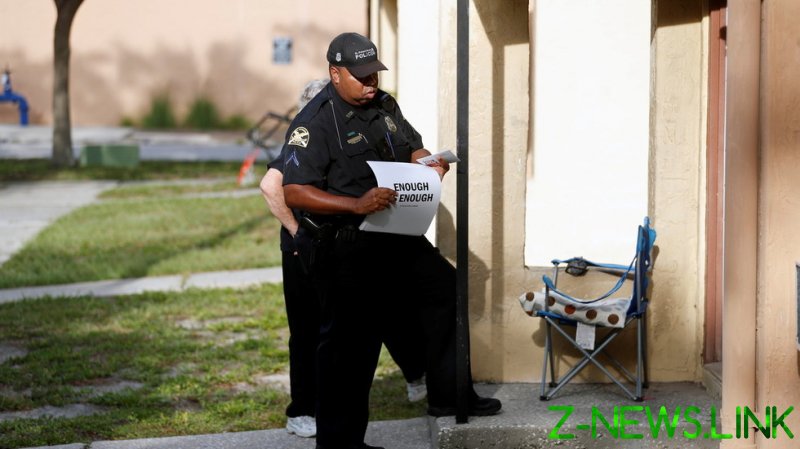 Santiago Alvarez, whose apartments are spread across eight southern Florida buildings, announced last week that his employees and new tenants must show proof of vaccination by August 15 at the latest. Current tenants of his buildings, concentrated in Miami-Dade and Broward Counties, must be vaccinated before attempting to renew their leases, he added, insisting that as a private property owner he is “just trying to keep people safe and healthy,” all lost profits aside. He claims to have lost between 12 and 15 employees to Covid-19, which he himself survived earlier this year.

However, Florida Governor Ron DeSantis’ sweeping ban on vaccination passports, which took effect on Thursday, renders Alvarez’s demands illegal, according to the governor’s press secretary Christina Pushaw. Not only can a “business owner…not require vaccine passports as a condition of entry,” but jobs and housing should not be threatened over a “personal medical decision,” she told Breitbart on the day the law took effect, criticizing the “unscientific and overreaching vaccine mandates” being forced on Americans by the White House and by local authorities.

“As a side note, it is ironic how the Left is all for the CDC’s unconstitutional eviction moratorium, but they apparently have no problem with a landlord threatening to evict lawful paying tenants over vaccination status,” Pushaw concluded, referring to the ban on evictions that has put small landlords in a bind for the past year as they have been rendered unable to evict deadbeat tenants and find renters willing to pay.

While Alvarez’s lawyer Juan Zorrilla has argued the landlord is not violating DeSantis’ order, given that tenants are neither “customers” nor “patrons,” the Federal Fair Housing Act bans showing or threatening to show preference, limitation or discrimination in renting or selling real estate based on race, color, religion, sex, disability, familial status, or national origin. The definition of ‘disability’ is broad, and has already been used to challenge mask mandates and other Covid-19 restrictions elsewhere.

However, Zorrilla explained that Alvarez, rumored to be the first large-scale US landlord to impose a vaccination requirement on the inhabitants of his buildings, was open to making exceptions for tenants or employees who opted not to vaccinate for medical or religious reasons.

The landlord himself sounded less than compromising speaking to the Washington Post earlier this week, though. “You don’t want to get vaccinated? You have to move,” Alvarez told the outlet. “And if you don’t move, one must move forward with eviction.”

The landlord slammed jab refuseniks for “a lack of consideration for your neighbor…a lack of consideration to their own families, to their children.” He insisted most of his tenants and employees were grateful for the mandate – though at least two employees and one tenant have already been forced out. Jasmine Irby, a 28-year-old security guard, field a complaint with the Florida Department of Agriculture and Consumer Services, arguing she should be permitted to renew her lease without having to “disclose my personal health information,” while two of Alvarez’ nearly 70 employees quit upon receiving a letter from the boss telling them to get jabbed or be fired.

Under the new state law, the Florida Department of Health is authorized to issue $5,000 fines to businesses, government offices, and educational institutions that demand proof of vaccination. DeSantis has been one of the most vocal political opponents of vaccine mandates, squaring off with Republican allies in states like Texas against President Joe Biden and a handful of Democratic governors.

Business owners and mid-level government officials in Florida, Texas, and other no-mandate states have taken it upon themselves to enforce variations on federal vaccine and mask mandates in spite of state authorities, setting up a series of legal battles in schools and businesses. Elsewhere, employees have quit en masse rather than take the jab, leaving municipalities with shortages of neonatal nurses in upstate New York or school bus drivers in Massachusetts.