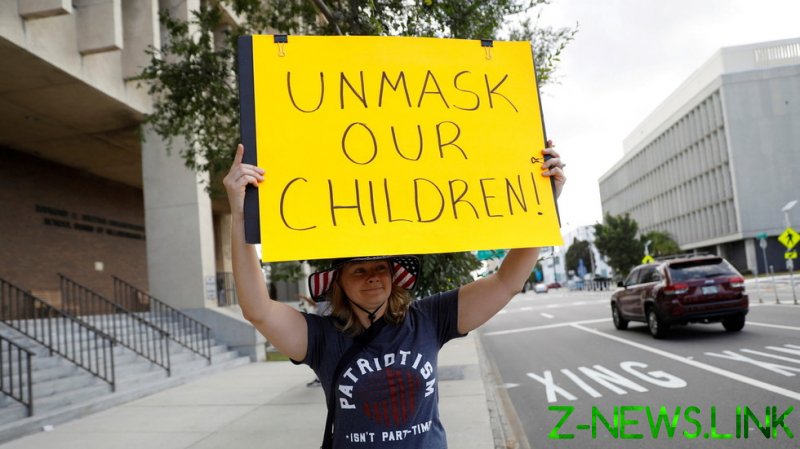 “The federal government has no right to tell parents that in order for their kids to attend school in person, they must be forced to wear a mask all day, every day,” DeSantis declared as he inked the order, adding that it was only “prudent” to give parents discretion for what health precautions their children need to take.

DeSantis’s new order comes after the Centers for Disease Control and Prevention (CDC) abruptly changed its guidance on K-12 schools earlier this week, recommending that all students, teachers and staff mask-up after the new school year kicks off. Long a vocal critic of the federal pandemic response, the governor launched a scathing attack on the new guidance, labelling it “unscientific and inconsistent” while noting that his action was prompted after several Florida schools boards nevertheless considered its implementation.

Having been accused of mixed messaging and an ever-changing stance on masks and vaccinations, the CDC defended its decision to bring back the indoor mask recommendation for all Americans regardless of their vaccination status. The agency cited a new study purportedly showing that fully vaccinated people are no less prone to falling sick with Covid-19’s Delta strain than the unvaccinated.

Conducted in a small town in Massachusetts earlier this month, the study showed that four of five patients – or 74% of those hospitalized with Covid-19 – were fully immunized.

While the new guidance led some states and cities to reimpose mask mandates in a rush – with California’s Los Angeles County going as far as mandating weekly tests for all returning students and staff, both vaccinated and unvaccinated – other territories were reluctant to follow suit. Indiana Governor Eric Holcomb refused to renew a statewide school mask mandate that expired on July 1, saying it was up to schools to make the call. Pennsylvania Governor Tom Wolf also assured Tuesday that he would not impose a new mask mandate for schools, arguing that there was no point as more residents become vaccinated.

“People have the ability… to make the decision to get a vaccine. If they do, that’s the protection,” Wolf said.

Texas Governor Greg Abbott, meanwhile, went a step further, warning state authorities, including public school districts, that they will face fines if they move to enforce the CDC advice on face coverings.

The CDC guidance applies only to regions with “substantial” or “high” viral transmission, which covers about 60% of all American counties, or those that reported at least 50 new infections per 100,000 residents over the past week.