Home / business / “Five stars” with facilities on the street 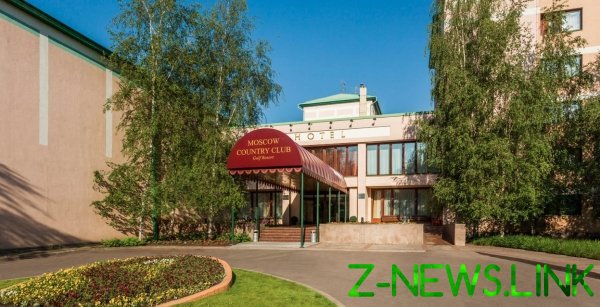 It would seem that the only Golf club of domestic foreign policy Department on the basis of the Moscow hotel Moscow Country Club in Nakhabino is bound to be a showcase of the hospitality policy and demonstrate all the advantages of a sovereign country. However, it appears that in the attempt to create a VIP object a unique atmosphere color of GlavUpDK of the Russian Ministry of foreign Affairs of the Russian Federation and the hotel management went so far that were not understood or representatives of foreign diplomatic missions, or even internal consumer.

Perhaps, of course, appointed last year, new managers management of the Ministry of foreign Affairs and its branch – hotel Moscow Country Club is guided by the consideration that half of Russia is still defecate on the street, but because in this tradition, hastened to close and all the urinals of its five-star facility. But the result of this approach to hospitality in the framework of the “conceptual improvement of a unique resort complex” was not only a massive failure of customer visits to Golf-hotel in Nakhabino, but also a stain on the reputation of nothing less than the whole of Russian foreign policy. Because to go to the wind outside residential premises foreign visitors unaccustomed already many centuries ago, as Russian tourists for several decades, the current model Moscow Country Club completely discredited themselves, as its masterminds – head of GlavUpDK Sergei Makarov and CEO at Yuri Volkov.

Built at the end of the last century in a beautiful forest near Moscow Golf hotel Moscow Country Club have not luck with management that eventually led to its decay and withering. At first the hotel business of GlavUpDK in Nakhabino put the wing on external partners. However, what worked in the dashing 90’s, stalled in the period, getting up from his knees. Appointed in 2011 as the new head of GlavUpDK of the MFA of the Russian Federation former Builder Mr Pasko felt that in the management of five-star hotel we ourselves with a mustache and quickly discourage foreign partners from the managerial levers.

Subsequently, began to walk the talk that foreigners would not be able to accept the new system of mandatory kickbacks, which was introduced in a difficult pattern of relations between top management of the Moscow Country Club, the officials link economic Department of the foreign Ministry. These rumors were confirmed in a collective letter to the President of the Russian Federation from 2015, signed by 36 staff members about total corruption in the structures of the Ministry. The chief diplomatic corps services Department Mr Pasko in this letter was called “a proven responsecom” receiving “kickbacks and a half million dollars a year.”

In place of the exiled corrupt Pashko was appointed ex-managing the Olympic facilities in Sochi Elena Zaritskaya that was undertaken to clean up the Augean stables of its predecessor in the system of GlavUpDK, including the long-suffering Moscow Country Club in Nakhabino, which by the mid-Teens already lost its former luster and became the vip hotel in an ordinary boarding house. However, to cope with the tangle of problems and return the Golf hotel relying MFA gloss Zaritskaya and failed, because not so long ago in high office, it was replaced with the current leader of the GlavUpDK Sergei Makarov in which the situation got out of control and even slipped into chaos.

A new broom determined to the position of Director of the Moscow Country Club Yuri Volkov, who lately referred to as the gravedigger of the object. With Volkov at the Golf hotel was not only closed toilets in the recent holidays, but the roof leaked a pool, and once comfortable rooms acquired form almost obseity rooms.

On top of that in the middle of this March in the restaurant of the Golf club, a fire broke out, in which the flame burned remains of the reputation of the former five-star hotel. They say that I asked the question about the place of the celebration of the 70th anniversary of which fell on coronavirus Saturday 21 March 2020, the Russian foreign Minister Sergei Lavrov remembered the Moscow Country Club, where some twenty years ago it was quite possible to assemble a respectable company. However, after learning from subordinates in deplorable condition Golf hotel GlavUpDK, refused to go there.

However, while the situation in Nakhabino does not change: dirty streams with a leaky roof drain basin on the head of the rare swimmers and small need here lost customers remains to celebrate it in the hole of the Golf course…

In a private hotel of such “effective managers” the owner wouldn’t let even a cannon shot. The business should develop, but by state control officials, which does not care about economic indicators a managed object. No liability to customers. There is liability only to the higher head. One of the guests in the hearts, stated: “Twenty years of vacationing here. But before such a state brought that it is impossible to be here. Or let return to the private operator. Or let them find a competent, commercial Director. Do something!”.

This is just one of the many reviews from regular customers. It is hoped that the higher the foreign Ministry heads will come off for a while from the globe will turn their attention to the problems in his home garden.