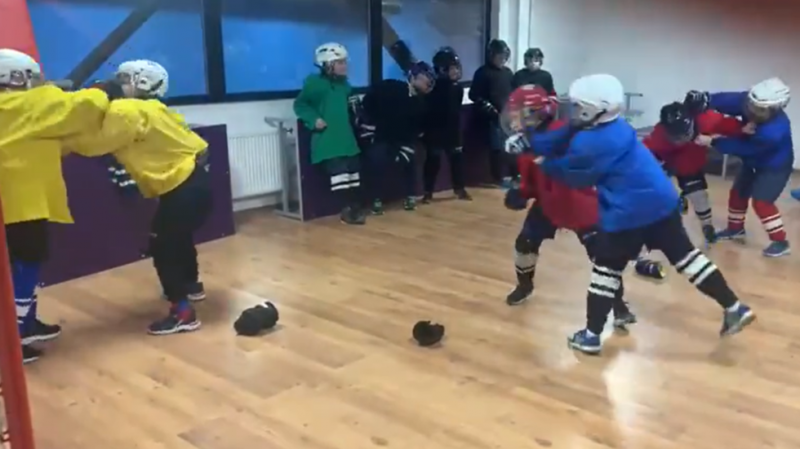 Daily Caller writer David Hookstead posted an article about the viral video on Saturday, showing children in protective hockey gear trading heavy-gloved punches to the helmet as a coach yells instructions. At one point, the coach holds a student by the shirt and throws a slow-motion punch to the facemask to demonstrate the proper technique to the team.

The video was so controversial back in Russia that it has prompted an investigation by the Russian Ice Hockey Federation (FHR). The coach targeted by the probe reportedly teaches a team of 7- and 8-year-olds at a school in Moscow. Some Russian observers, including sports commentators, were appalled by the fight training, while others said young players should be prepared for an integral part of the game.

The FHR made clear where it stands, saying Friday that the “Red Machine” national hockey program “explicitly prohibits” such training methods. It vowed to “strictly suppress” improper training methods at all Russian hockey schools.

But Hookstead saw an admirable side of the fighting workout – one to be envied – saying Russia is “trying to crank out some young hockey beasts.” He added, “American kids are busy playing video games and eating junk food, while the Russians are teaching their young how to beat the living hell out of each other.”

Another reader quipped, “How are we supposed to raise tough kids if they aren’t punching each other in the face at 8 years old?”

But like most everything in the US nowadays, the discussion took on a political bent, with supporters of President Joe Biden and Black Lives Matter bashing the article. One such observer brought the issue full circle, alleging a possibly sinister motivation for Hookstead’s praise of the fighting class.

“I wonder if the Kremlin gives the Daily Caller money like they do with the Federalist,” self-described gamer and Black Lives Matter supporter Rick Hennig said.