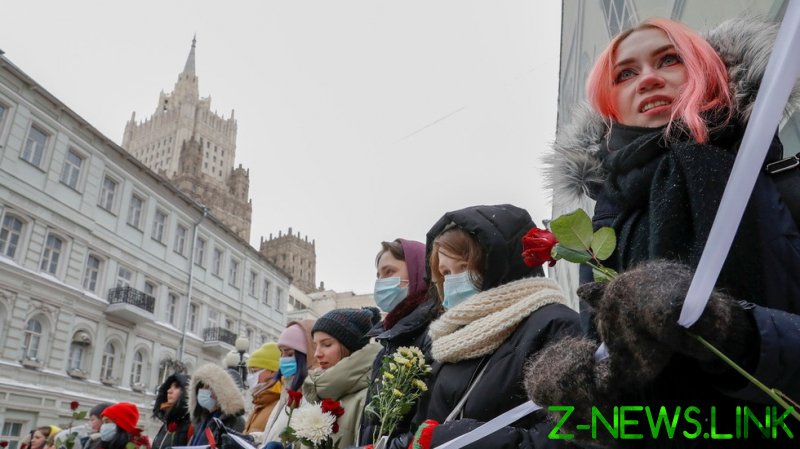 The gathering, on the central Arbat Street, coincided with Valentine’s Day and was dubbed “Love is stronger than fear.” Some of the participants were given flowers, balloons and leaflets with black hearts.

Those involved told reporters the “chain of solidarity” was aimed at showing support to figures they referred to as “female political prisoners” detained in Russia.

Many of the younger participants struggled to name any “imprisoned” women in particular. Meanwhile, others mentioned Navalny’s wife Yulia and his close associate Lyubov Sobol as well as Pussy Riot activist Maria Alekhina. However, none of them are actually in jail. 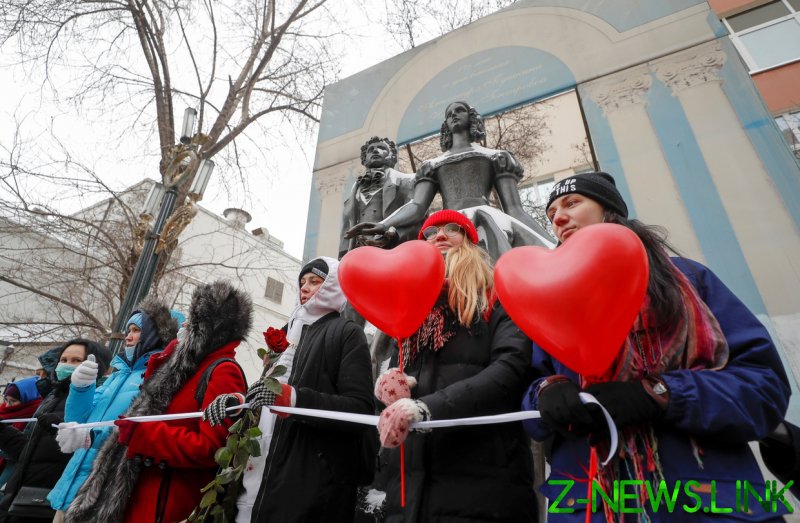 Yulia Navalnaya left the country for Germany earlier this week. Her husband was sentenced in early February to two-and-a-half years behind bars for parole violations. Sobol was placed under house arrest for two months for calling for mass protests in violation of Covid-19 restrictions.

The unsanctioned gathering in central Moscow passed off without any significant police presence, and saw no incidents or arrests. After the action ended, a woman seemingly overseeing the action rolled up the white ribbon, and the protesters collected all the litter they left in the street.

A similar “chain of solidarity” was formed on Sunday in Russia’s second city, Saint Petersburg. The rally saw 70 people taking part and was also peaceful.

Both Moscow and Saint Petersburg have seen heated protests, with clashes and arrests over two weekends, after Navalny was arrested on his return to Russia from Berlin in mid-January. The anti-corruption activist spent five months in Germany recovering from what he insists was a poisoning attempt masterminded by the Kremlin – an accusation flatly denied by the Russian authorities, who say no proof of poisoning has been provided by Berlin, despite repeated requests.

Following several unauthorized protests ending in mass arrests, Navalny’s associates called on supporters to refrain from taking to the streets and to delay rallies until at least the spring. The decision came after their movement swiftly lost momentum, with crowds noticeably smaller on the second weekend.

However, this week they announced a slight change of tactics, urging people to stage small, localized demonstrations by going out into their backyards and using a torch, a candle, or the light on their phone to show their discontent with the government, mirroring one of the ideas of the protesters in neighboring Belarus.

Photos showing small groups of torch-wielding people in the snow have since appeared on social media.