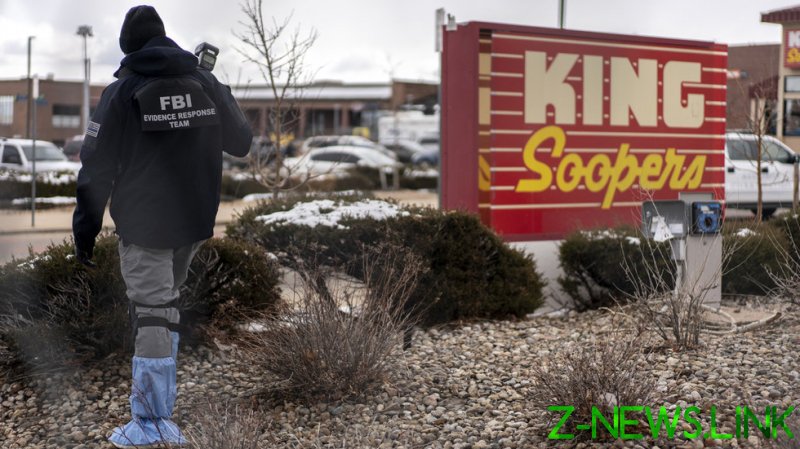 Ahmad Alissa, a 21-year-old man from Denver who went on a shooting rampage at a King Soopers grocery store in Boulder on Monday evening, has been charged with 10 counts of first-degree murder.

The mass shooting has caused an outcry, including calls for strict gun control and for a crackdown on “white supremacists” – but the former died down after it emerged the suspected shooter was reportedly Syria-born.

However, anger among the public and commenters has grown even more following a report in the New York Times that claimed Alissa was known to intelligence officials due to his links to another individual under investigation by the FBI.

This has prompted some pundits to claim that the Boulder shooting marked the FBI’s latest failure to prevent terrorist attacks on US soil, highlighting previous massacres, such as the Las Vegas shooting in 2017 and the Boston Marathon bombings in 2013.

Conservative commenter Jack Posobiec suggested that the FBI – under its current chief Christopher Wray – has not prioritized the detection of those planning attacks.

He accused intelligence officials of failing to spot a potential plot by Alissa, despite the alleged shooter reportedly using “basic” methods to avoid surveillance, such as the Tor software and commercial VPNs.

Some critics of the FBI pointed to the fact the Boulder shooting had taken place while the bureau was busy searching for “right-wing extremists” like conspiracy group QAnon in the wake of the US Capitol riots on January 6.

Following the Boulder shooting, President Joe Biden has renewed his calls to ban assault weapons and called on Congress to back bills that prevent people from evading background checks when they buy firearms.

But his remarks have drawn backlash, including from former intelligence officer Anthony Shaffer, a vocal critic of the FBI, who said Biden’s proposed gun controls were already in place in Colorado, but still allowed a man on the FBI’s radar to murder 10 people.