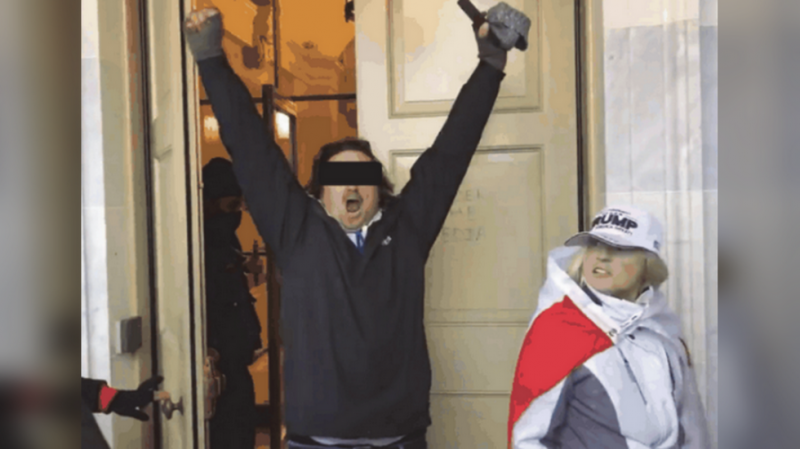 Lois Lynn McNicoll, an employee of the Los Angeles County Department of Public Social Services, was arrested on Monday and released on a $10,000 bond, an FBI spokeswoman told the Los Angeles Daily News.

Her arrest came after a months-long information-gathering operation by the FBI, beginning when two co-workers identified her in video footage from the pro-Trump riot on Capitol Hill in January and snitched to the agency.

Her crimes, if they could be called that, included walking into the Capitol (while a Capitol Police officer held open a door for her), taking photos with her cell phone, and walking back outside when instructed to by an officer – all detailed in court documents. Nevertheless, she has been charged with knowingly entering a restricted building, disrupting the orderly conduct of government business, and engaging in “disorderly or disruptive conduct” on Capitol grounds.

McNicoll spoke voluntarily to the FBI back in May, the court documents reveal. While McNicoll said that she saw the security barriers around the Capitol, “she did not feel that she was doing anything wrong” by entering the building.

As news of McNicoll’s arrest and the charges against her broke, conservative commenters and pundits were in disbelief. “Another MAGA mama arrested for Capitol selfies,” one remarked, accusing the FBI of “egregious political persecution.”

“I for one will sleep better tonight knowing this monster is off the streets,” pundit Jesse Kelly sneered.

McNicoll is one of more than 500 people arrested for taking part in the Capitol riot, which Democrats and their allies in the media have dubbed an “insurrection,” “domestic terrorism,” and an “attack on our democracy.” Dozens are still being held in deplorable conditions in a Washington, DC jail, and the first woman sentenced for taking part in the riot – a woman several years McNicoll’s junior – only got a lenient sentence because of her “immense remorse,” the Daily Beast reported last week.

Meanwhile, questions remain unanswered about the FBI’s foreknowledge of and involvement in organizing the riot itself. Charging documents against militia members who took part in the riot reveal dozens of “unindicted co-conspirators” who have not been charged and whose names have been kept anonymous, suggesting that they were employees of, or informers for, the agency.