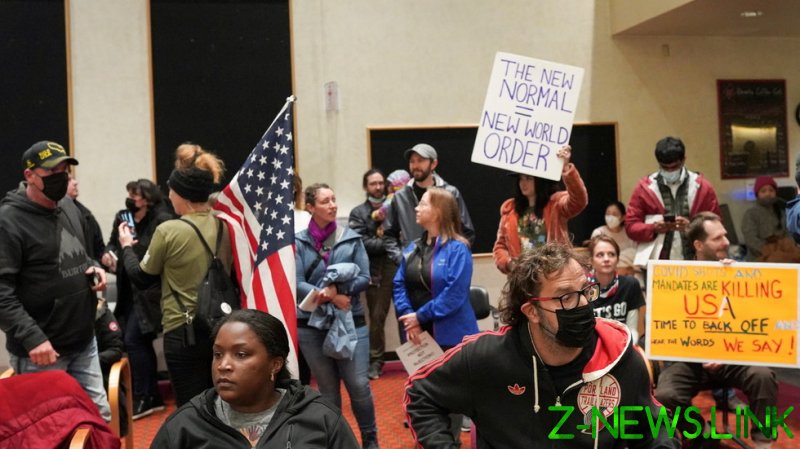 Wray’s comments were made at the national conference for the Society of Former Special Agents of the FBI last month in Arizona, the Daily Caller reported on Thursday.

Cecil Moses, a retired agent and former Alabama police chief, said Wray wanted to push back against any “misconceptions” about the FBI’s role in increasingly heated school board meetings across the country.

“He made the comment that the Bureau will stay in his own lane and I think that’s a very, very cogent comment,” Moses reportedly said.

The comments come amid concerns among activists and parents after the Department of Justice released a memorandum last month calling for the FBI to work with local law enforcement agencies to investigate a “disturbing spike in harassment, intimidation, and threats of violence” against school board officials. Most of the controversies have revolved around often-changing Covid-19 policies, as well as controversial subjects such as Critical Race Theory (CRT).

The DOJ letter followed a message from the National School Boards Association (NSBA) to President Joe Biden, referring to threats made by angry parents as potentially “the equivalent to a form of domestic terrorism and hate crimes.”

Republican lawmakers have since expressed concern over the prospect of FBI agents attending school board meetings, which Wray reportedly said will not be happening.

“He made it clear he didn’t want it to be any misconception that there’s going to be FBI agents out there looking over the shoulder of parents or monitoring school board meetings and the like,” Moses said.

Other former agents at the event said the Biden DOJ letter referring to FBI involvement could simply be “messaging” to scare parents, while others suggested Wray’s comments may be “purely for show” to appease other agents who are “up in arms” over the missive.

Attorney General Merrick Garland has defended the DOJ’s memorandum and claimed there are no political motives, saying the department is simply responding to “concerns about violence, threats of violence, other criminal conduct.” He added last month that meetings with local law enforcement agencies would determine if federal assistance is needed to deal with supposed threats and warnings of violence at school board meetings.