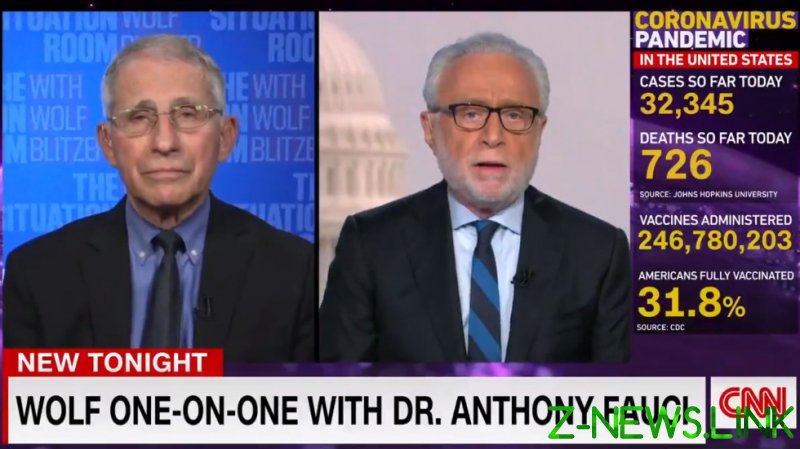 “We’ve really got to not declare victory prematurely,” Fauci told CNN host Wolf Blitzer on Tuesday. “So we’re in the late innings, but it’s not over. That’s the thing we’ve got to get people to appreciate.”

Pressed by Blitzer to be more specific, in baseball terms, how soon the pandemic will end for Americans, Fauci said, “the bottom of the sixth.” That would mean the battle is more than 60% completed – unless the game can somehow be extended into extra innings.

Critics of Fauci, who is chief medical adviser to President Joe Biden, found no encouragement in the doctor’s comments. “Time to pull Dr. Fauci off the mound,” US Representative Jim Jordan (R-Ohio) said on Twitter, continuing with the baseball analogy.

Fauci has a history of flip-flopping on his Covid-19 advice and moving the goalposts at various stages of the pandemic. What started as “15 days to slow the spread” has turned into a 14-month battle, with the doctor calculating another nine to 14 months to go. He admitted last December to purposely deceiving the public about vaccine herd-immunity projections to manipulate opinions.

Biden on Tuesday set a new goal of having 70 percent of adults vaccinated with at least one Covid-19 jab by July 4. Earlier in 2020, Fauci said the US could achieve herd immunity once 60-70 percent of the population was fully vaccinated. But he repeatedly moved that target back as the year wore on, going to as high as 85 percent in December.

“We’re going in the right direction,” Fauci said in Tuesday’s CNN interview. “We’re seeing the light at the end of the tunnel, but now’s not a time to declare victory. It’s a time to get more and more people vaccinated.”

Fauci has enjoyed rock-star status during the pandemic, being showered with awards and mainstream-media adulation. A children’s book that’s scheduled for release in June bestows him the title “America’s doctor.” His 80th birthday was celebrated as Dr. Anthony Fauci in Washington, DC, and he was serenaded with the birthday song by Biden, then president-elect, and future First Lady Jill Biden.

Fauci also was chosen to throw out the ceremonial first pitch when the Washington Nationals baseball team opened its 2020 season last July – an episode that didn’t end well.

Blitzer ended Tuesday’s interview by suggesting that he and Fauci “go to a baseball game one of these days.” The friendly banter wasn’t the first hint that CNN and Fauci may be in league together.

CNN technical director Charlie Chester was shown on video in April telling an undercover Project Veritas reporter that the media outlet had purposely fearmongered about Covid-19 to boost its ratings.