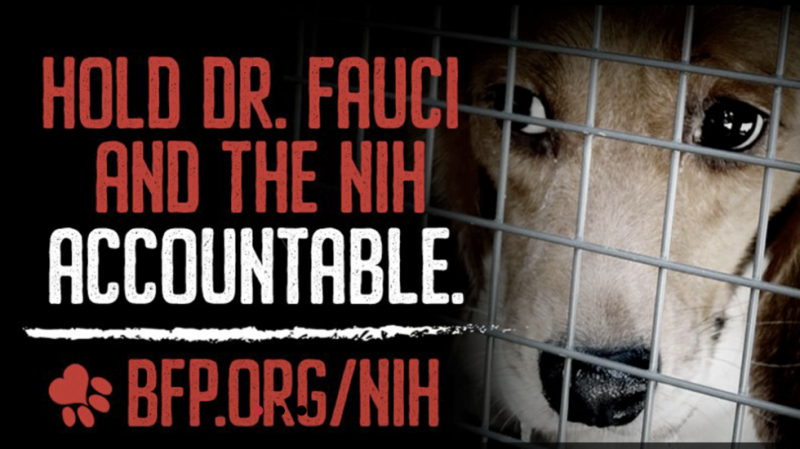 Devoted to fighting animal testing, the group has added its voice to the growing chorus against Dr. Fauci’s record of animal cruelty. On Wednesday, the Beagle Freedom Project issued a subtle legal threat against the doctor’s National Institutes of Allergy and Infectious Disease (NIAID), warning that “if science and wasteful taxpayer spending are not enough to convince you [to cease experimenting on beagle puppies], perhaps legal changes will.”

BFP founder and president Shannon Keith demanded Fauci and his organization “cease the use of animals in research, end funding to those using animals, and release those animals who are currently in laboratories to Beagle Freedom Project.”

“Bearing witness to what you and your organization does to these animals is nothing short of criminal. It is time to end it, and now the world is watching,” Keith’s letter continued, noting that “if it does not end immediately, Beagle Freedom Project will make sure it becomes criminal and those who perpetrate it will be punished by law.”

The organization joins a bipartisan chorus of dog-lovers in denouncing Fauci’s experimentation with beagles, initially exposed by White Coat Waste Project, a group that fights animal testing and the use of taxpayer dollars to fund it.

One particularly horrific experiment Fauci’s NIAID apparently paid for involved locking beagle puppies’ heads in boxes with sand flies, which were given hour-long intervals to feast on the poor dogs’ faces. Weary of the suffering dogs’ helpless cries, the experimenters arranged to have them “de-barked” – a barbaric procedure known as a cordectomy.

Even some members of Congress, which has been largely mute or tacitly approving of Fauci’s controversial decades-long record – in which a topic of gain-of-function experiments figured much more prominently than anything he did to dogs – have gone on the warpath upon learning of his animal cruelty record. A bipartisan group of 24 lawmakers issued an ultimatum to Fauci last Thursday, demanding he cough up information regarding how many dog similar dog experiments NIAID had funded since 2018, and how much was spent on them.

They also demanded to know why Fauci was experimenting on dogs, given the Food and Drug Administration (FDA) had no requirement for such tests, and questioned whether the dogs had been made available for adoption following the brutal procedures.

However, not everyone has been willing to throw the man once embraced as America’s Doctor under the bus. Washington Post columnist Dana Milbank praised Fauci’s beagle research on Monday, though not before attempting to distance Fauci’s agency – the NIAID – from its parent, the National Institutes of Health. The most horrific experiments had been bankrolled by the NIH, Milbank argued before going on to defend beagle vivisection.

Whether or not Fauci had funded all of the reported experiments, allowing sand flies to chow down on hapless puppy faces was actually a legitimate procedure and not sick animal torture, Milbank continued, insisting that even the cordectomies so many found objectionable were a perfectly logical part of the affair. No mere conscience-soothing measure for experimental technicians, they “reduce anxiety (in dogs) and hearing loss (in humans) from barking.”

Insisting “the FDA requires researchers to experiment on non-rodent mammals for certain classes of HIV-AIDS drugs, and for this study specifically recommended dogs,” Milbank complained it was “necessary” to use young dogs in the experiment to see whether the drugs being tested “retard growth,” and that euthanization was required “so researchers can search for damage to organ systems.”

However, in an apparent counter-argument to Milbank’s claim about the FDA’s animal experiment requirement, Keith mentioned the FDA Modernization Act, which was introduced to repeal a previous mandate requiring drugs be tested on animals.

Fact-checkers also surfaced on Tuesday in Fauci’s defense, with AP insisting he had not been involved in a study of “monkey threat responses.” It’s not clear why they focused on “debunking” a secondary rumor involving monkey studies when the rest of the conversation swirling around Fauci references his dog experiments exclusively.