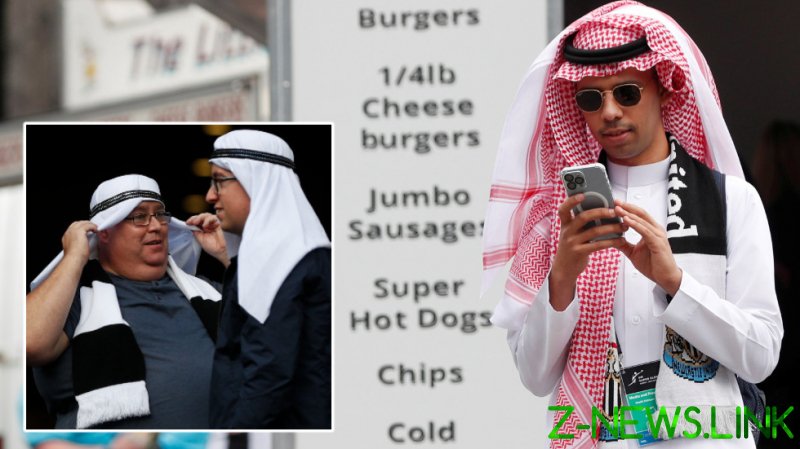 Exuberant fans of the underperforming top-flight team, which is now owned by a consortium led by Saudi Arabia’s Public Investment Fund (PIF) following a protracted takeover, were filmed dancing outside St James’ Park while waving the Saudi national flag before the 3-2 defeat to Tottenham on Sunday.

While supporters celebrated the long-awaited departure of unpopular former chairman Mike Ashley, some viewers voiced reservations about cultural appropriation, with others unimpressed to see fans drinking beer at the same time as they adopted the symbolism of a country where alcohol is prohibited.

Equality group Kick it Out is now planning “urgent talks” with the club because of the choice of attire seen being worn around the stadium, according to Sky Sports.

That could include discussions with PIF governor and new Magpies vice-chairman Yasir Al-Rumayyan, as well as part-owners Amanda Staveley and her husband, Mehrdad Ghodoussi, who were at the game.

The report says that fans in the north-east region where the club is based could be told why the costumes might be considered ‘stereotypical and culturally offensive.’

Speaking to Muslim news site 5 Pillars about his decision to wear a headdress, one fan who also wore a fake beard said he had bought his outfit on Amazon and asked: “Why not?”

When asked whether they believed their outfit was what people wore in Saudi Arabia, they replied “aye” before conceding that they knew “not really much” about Islam and Muslims.

“Just let the people enjoy what’s to come,” added another fan in a headdress. “It’s been 14 years of horrible football.“

A viewer on YouTube explained why they had misgivings about the jubilant pre-match scenes because of the Shahada Islamic oath that can be seen on the Saudi flag.

“I don’t like the picture of them dancing… probably they don’t know about the meaning for us Muslims, but this just feels wrong,” they added.

The new consortium is expected to make Newcastle one of the richest clubs in the world and transform them from Premier League strugglers to potential title contenders.

The vast majority of supporters who attended their fifth defeat of a winless eight-game season so far are expecting the imminent departure of beleaguered Newcastle boss Steve Bruce.