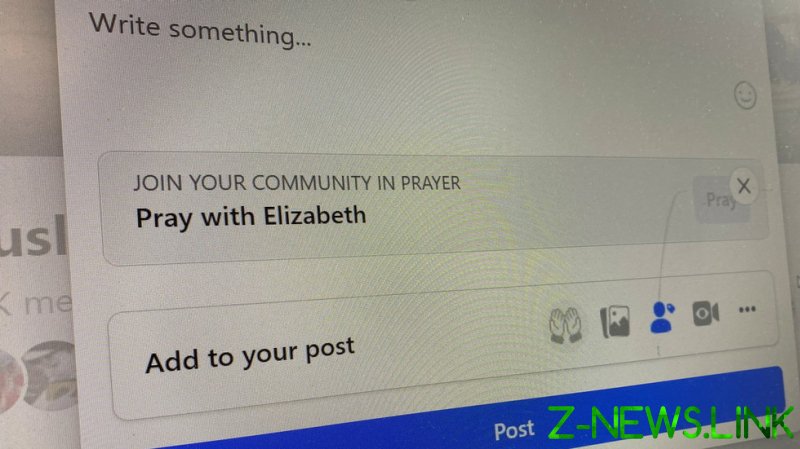 The prayer feature, which was quietly rolled out to US-based Facebook Groups in May, is part of the tech giant’s focus on expanding engagement on its platform by tapping into faith groups. At the firm’s ‘Communities Summit’ in 2017, CEO Mark Zuckerberg had hinted at this in his praise of churches.

Nona Jones, a pastor from Florida who is Facebook’s head of faith partnerships, told Reuters the new tool had been developed after the company saw a spike in the number of people asking for prayers during the Covid pandemic.

It allows users in Facebook Groups that have enabled the feature to request prayers for a variety of reasons, including illnesses, upcoming tests, legal issues and other life events.

Other people can then reply by clicking a button to say “I prayed” and have their Facebook usernames listed under the prayer request. They can reportedly even opt to receive a notification to offer more prayers the next day.

However, just like the other content posted on the platform, these prayer posts are also used to churn out personalized ads, Jones said. A company spokesperson told the outlet that the data created from the prayer tool feeds into how Facebook’s adtech algorithms decide which ads to show users.

But the spokesperson claimed advertisers would not be able to directly target ads based on the prayer content or use of the tool. Using the tool apparently will not be factored into the interest-based categories like ‘faith’ or ‘Church’ that Facebook’s ad buyers use to classify audiences.

Although many religious leaders have reportedly welcomed Facebook’s attention at a time when worshippers are forced to stay at home, some users voiced concerns over the privacy of prayer posts, the potential exploitation of their spirituality, or how “icky” the whole thing felt.

“Anytime Facebook rolls out something new, you know it’s because they are hoping to make money off it… to eventually sell you something, somehow,” Simcha Fisher, a member of a Catholic women’s Facebook Group, told Reuters.

The majority of social media users echoed that sentiment, with some people claiming that they did not think the platform could “get any creepier” while another person claimed Facebook was being “subtle and crafty” for “easing into the one world religion through desensitization and deception.”

Others said the episode reminded them why they had left the platform, with one person who recently quit Facebook noting that this would have been the last straw if they were still undecided about leaving.

However, some users were cautiously optimistic about the feature, with one person suggesting that it seemed like a “good thing” before noting that “lots of things on Facebook seemed good at first.”