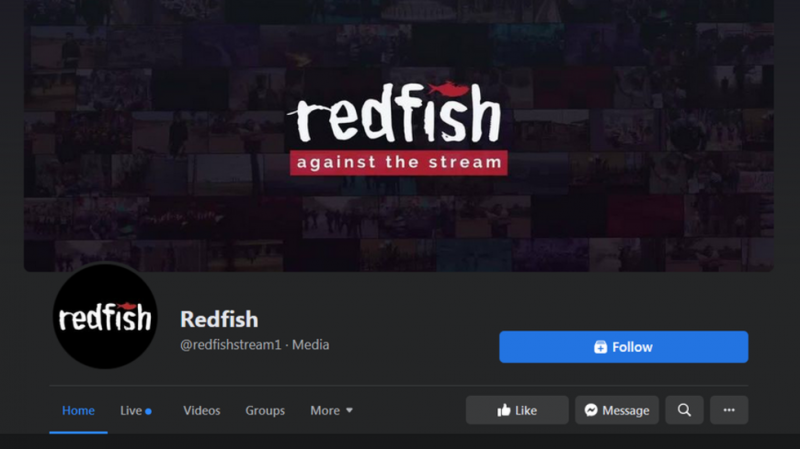 The page of the award-winning Berlin-based project was restored by Facebook on Saturday. The account got deleted by the social media giant on Friday over alleged violations of its “community standards” with several posts that commemorated victims of the Holocaust, as well as celebrated an anniversary of the downfall of the fascist regime in Italy with an upside down photo of Benito Mussolini.

The page, boasting over 800,000 followers, is now available under a new URL address and remains heavily restricted, Redfish said in a statement.

“It is still at risk of being deleted. The posts commemorating victims of the Nazi Holocaust and the defeat of fascism in Italy remain flagged as ‘content violations’ that threaten the survival of our page,” Redfish said. “Our account is also severely restricted, it has been made invisible to Facebook users who do not follow Redfish, and we are banned from inviting people to like the page.”

The status of the page has effectively changed from being flatly banned to being “under the risk of being unpublished…due to continued Community Standards violations,” the Redfish team told RT. While Facebook promised on Friday that someone would contact the project to address the issues, Redfish still has not heard anything from the social media giant.

The action against Redfish – which previously was labeled by Facebook as “funded in whole or in part by the Russian government” during a big tech campaign against Russian-linked media – has been criticized by the head of the International Federation of Journalists, Anthony Bellanger.

“If pictures of prisoners detained by the Nazis during World War II are removed because they allegedly breach nudity guidelines then Facebook’s algorithms are not fit for purpose,” Bellanger told RT, suggesting the project might have been targeted for “political reasons.”

“There are grave concerns that an unaccountable private corporation like Facebook can decide, which political views it allows and which it decides to censor. That is a dangerous path to go down and can undermine media freedom.”

The ban has also provoked a furious reaction from RT editor-in-chief Margarita Simonyan, who promised to lobby for the suspension of Facebook in Russia altogether if the project’s page is not restored.

“It’s not quite clear what this ‘community’ found so insulting. Was it the Mussolini photo, the reference to [the] Holocaust, or the very existence of the Redfish project, which the Western establishment has long been irritated about,” Simonyan wrote in a social media post. “If the page is not back, I promise I will personally be seeking Facebook’s suspension.”