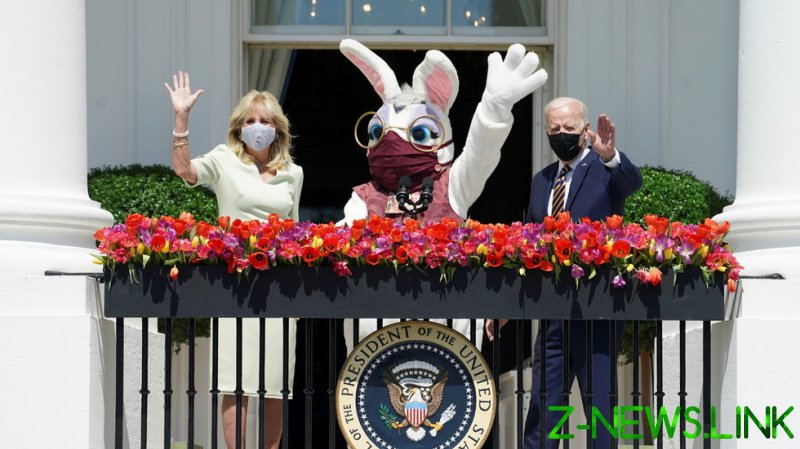 Having cancelled the customary egg roll, the White House apparently sought to liven up the otherwise toned-down celebration on Monday with the visits from not one, but two Easter bunnies – both masked up, despite being clad in head-to-toe full body costumes.

One of the bunnies was played by the president’s military aide, Air Force Lieutenant-Colonel Brandon Westling. He joined the Bidens on the White House balcony as the president said he hopes to bring the egg roll back next year.

Another giant mascot – played by Megan Hays, White House deputy communications director for strategic planning – sauntered into the White House press room in the midst of some persistent questioning by a reporter about voting rights.

The bunny’s intervention came while Press Secretary Jen Psaki was apologizing sheepishly for how the president’s Easter celebrations were “not quite the same” this year, promising to “do a big one next year” while suggesting that those present should be content with the furry creature and “some special commemorative Easter eggs for you all from the first couple.”

A reporter asked if “the bunny would be taking questions,” but the furry figure did not. Hays’ bunny didn’t even stick around to hand out the presents, outsourcing the task to another White House staffer in the room.

While some reporters were thrilled by the spectacle, fawning over the giant mascot, others were not bemused.

Some suggested the Easter bunny was brought in in a deliberate maneuver so that Psaki can dodge questions about the Georgia election integrity law.

Others took aim at the bunnies’ attire, with conservative political commentator Chance Coleman calling it “the dumbest display of virtue signalling I have ever seen.”

“I want to know why the Biden [administration] felt the need to sew a mask onto an Easter Bunny Costume? Children do not watch Political Television, the main viewers are adults,” another dumbfounded critic chimed in.