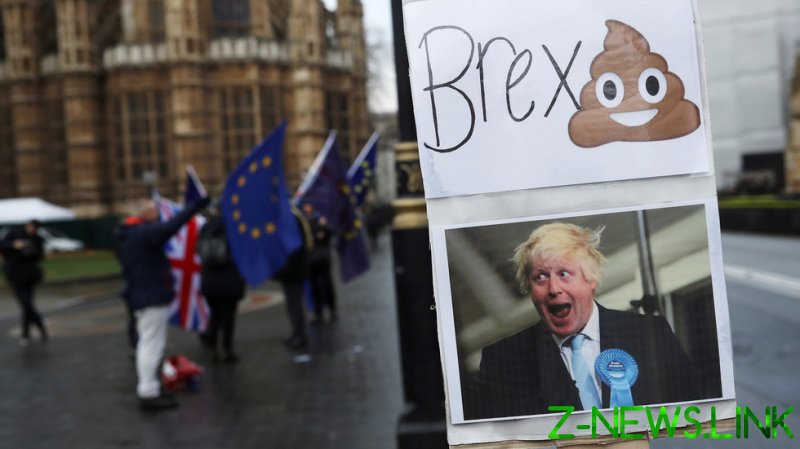 The 82-second-long track contains the timeless and catchy lyrics, “Boris Johnson is a f***ing c***/ He’s a f***ing c***,” on repeat and has already peaked at number 2 on the UK iTunes chart (now sitting in fourth place) while also reaching second place on the Amazon Music charts (currently in third).

Channeling as much of the Sex Pistols-era punk shock tactics as possible, Mike Gibbons (the man behind The K**ts) claimed the track features Ca***hole on guitar, Skidmark on bass and F***sticks on drums.

Gibbons’ previous highest entry in the charts was 2010’s equally political ‘Use My A**ehole as a C**t (The Nick Clegg Story)’ with his band K**t And The Gang.

Gibbons plans to tour the country in 2021 providing venues are open again, though his plans may be dashed by the man to whom his Christmas number one contender is dedicated, given the recent spike in coronavirus cases in the UK and ensuing raft of travel restrictions and additional lockdowns.

Satirist, social commentator and ‘Black Mirror’ creator Charlie Brooker has already given the track his blessing, as have many others across the UK, apparently.

Many tweeted their own endorsements for the expletive-laden track to reach the top spot.

The official Christmas number one will be announced on Friday December 25 but, even if ‘Boris Johnson is a F***ing C***’ wins the title, it is unlikely to earn heavy radio play alongside the usual yuletide classics given its explicit lyrical content and edgy, anti-establishment messaging for the Covid-19 era.

On Sunday radio programme ‘The Official Chart: First Look,’ presenter Katie Thistleton, merely described the track as the song with “so many bad words in it, we can’t play it on daytime Radio 1”.

The K**nts face stiff competition from seasonal stalwart, Mariah Carey’s ‘All I Want For Christmas is You,’ which was pipped at the post by 1994’s official UK Christmas number one ‘Stay Another Day’ by East 17, and never reached the lofty heights of the UK number one until earlier this December.

However, the bookies’ favourite for the 2020 Christmas crown is the sausage-roll-obsessed LadBaby (real name Mark Hoyle), who earned the last two Christmas number ones with 2018’s ‘We Built This City (On Sausage Rolls)’ and 2019’s ‘I Love Sausage Rolls.’

This year’s ‘Don’t Stop Me Eatin’ is currently favourite to win the race to number one.

LadBaby raises money for The Trussell Trust, which provides emergency food to the UK’s poorest people, through various charity singles each year.

“LadBaby has reigned supreme in the festive charts for years now, every time surprising himself with a sausage roll-themed cover version to raise hundreds of thousands of pounds for food parcels,” Betfair spokesman Sam Rosbottom said.