Exhibition rematch between Klitschko and Lewis will not take place 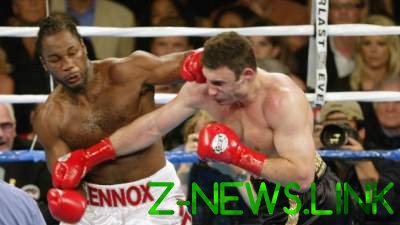 The official fan site of the Klitschko brothers last week announced the exhibition fight between the elder Klitschko and Lewis. Two famous boxer had to meet in the framework of the 56th Congress of the world Boxing Council (WBC) in Kyiv from September 30 to October 6.

According to ESPN, representatives Lewis contacted the WBC and said that no negotiations for the exhibition fight with Klitschko, they were not.

Vitali Klitschko had planned 15 years to take revenge from Lewis, and all the proceeds to give to charity. The initiative of the current mayor of Kiev, apparently, has not received bilateral continue.

Vitali Klitschko and Lennox Lewis met for the first time on 21 June 2003 in Los Angeles in the battle for the British owned the WBC and IBO. One of the most exciting fights of the 10th anniversary ended with the defeat of the Ukrainian technical knockout – defeating Lewis at the judges ‘ notes, Vitali Klitschko could not continue the fight due to severe cuts.