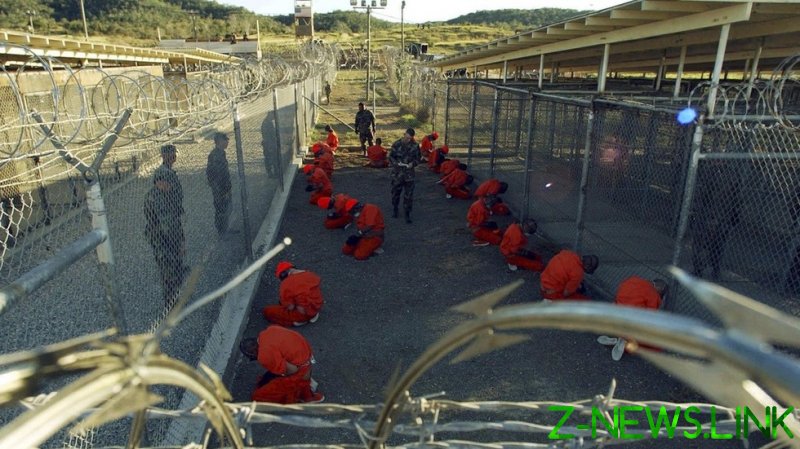 “I was chief prosecutor at Guantanamo for over two years, and there’s far more evidence of Congressman Madison Cawthorn’s guilt than there was of guilt for 95+ percent of the detainees,” Davis said Monday on Twitter.

More than 59,000 people have signed a change.org petition demanding his resignation. Cawthorn, a paraplegic who at 25 is the youngest member of Congress, blamed the violence during the riot on left-wing agitators. He later condemned the “actions of a violent few” as “cowardly and pathetic” and said it was “sickening and infuriating” to see people with American flags and Trump flags storming the Capitol.

At a time when Democrats are branding supporters of President Donald Trump, including members of Congress, as dangerous white supremacist, Davis’ tweet took the discourse to an even higher level. Fox host Tucker Carlson said the retired colonel is essentially calling on people like Cawthorn and the millions of Americans who voted Republican to be “subdued by force.”

“Has Twitter seen Moe Davis tweet?” Carlson asked. “Has the Secret Service? Do they care? Will a single one of Col. Moe Davis many allies in the Democratic Party denounce what he said or even tell him to cool it a little bit?”

Cawthorn, who beat Davis by more than 12 percentage points in the November 3 election, responded to the sedition allegation by urging his supporters to “never back down to the violent left.” He added, “My disgraced and defeated opponent wants to declare war on conservatives.”

Several Twitter users noted the irony that Davis was accusing Cawthorn of wrongdoing by admitting that he participated in prosecuting innocent people. Davis was reassigned from Guantanamo at his request in 2007, after superiors overruled his policy of refusing to use evidence obtained during waterboarding.

But he showed no lack of enthusiasm in prosecuting detainees, reportedly mocking their defense claims as “nauseating” and saying of their excuses for being caught in Afghanistan: “When these guys went to camp, they weren’t making s’mores and learning how to tie knots.” He also defended the conditions at the prison as humane, professional and legal.

“Welp, there it is,” author and retired US Army Lt. Col. Tony Shaffer said. “Another Democrat admits to past wrongdoing on Twitter. So, according to Moe Davis, he knowingly prosecuted innocent detainees at Gitmo 95 percent.”

Another observer responded with a screenshot of a 2019 tweet that might shed light on Davis’ penchant for political vitriol. “Screw they go low, we go high bulls**t,” Davis said. “When GOP extremists go low, we stomp their scrawny, pasty necks with our heels, and once you hear the sound of the crisp snap, you grind your heel hard and twist it slowly side to side for good measure. He needs to know who whupped his ass.”