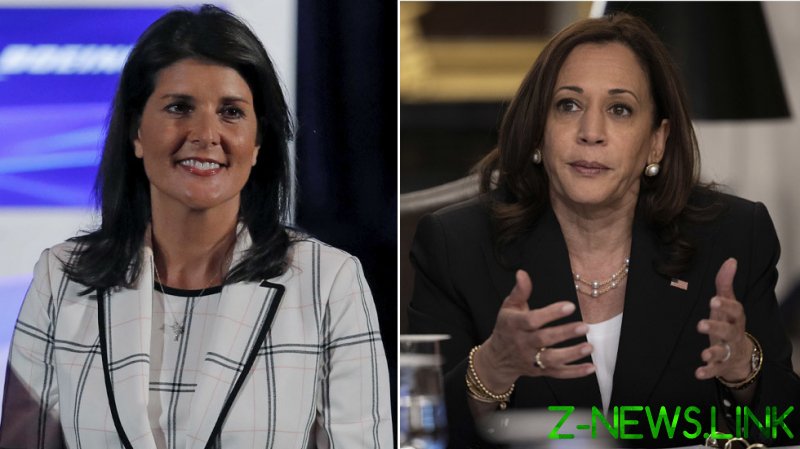 Haley, who served as the US permanent representative at the UN under Donald Trump, joined a chorus of conservative voices criticizing the way Harris chose to tweet about the upcoming Memorial Day without spelling out the name of the holiday. She dismissed the VP as “unprofessional and unfit” for her job.

The three words were met with anger and vitriol from Twitter blue check marks, who unleashed a barrage of criticisms and personal attacks at Haley. “Yes, you certainly are,” shot back Jon Cooper, the former Democratic Majority Leader at the legislature of New York’s Suffolk County.

Brian Karem, the Playboy correspondent in the White House, sniped at Haley, suggesting she was responding to a suggestion to unburden her soul from her many transgressions.

Gun control campaigner Shannon Watts accused Haley of being herself unfit for her former diplomatic job. In 2017, Haley complained about having to work too much amid a security crisis in the Korean Peninsula, Watts said, posting a screenshot of the tweet in question.

Meanwhile, author Terry McMillan, who is a woman of color, blasted Haley for allegedly being racist and jealous of a “black woman who has more power than you ever will.” Haley, who is of Sikh descent, served as the governor of South Carolina, before joining the Trump administration.

Others brought up Haley’s own presidential ambitions, with lawyer and political columnist Seth Abramson branding her a “coward” who will never be elected due to her failure to condemn Trump hard enough following the January 6 riot on Capitol Hill.

Haley did criticize her former boss, however, saying the president “went down a path he shouldn’t have” with his claims of election fraud, but she didn’t join the never-Trump wing of the Republican Party.

US Representative Eric Swalwell (D-CA) too brought up Haley’s association with the former president, mentioning a story about Trump allegedly calling US soldiers killed in Europe during World War I “losers” and “suckers.”

Like many other stories about Trump’s unbefitting behavior, this one was based on anonymous sources and was never definitively proven to be either true or false.

VP Harris’ tweet became the latest hill to die on in the partisan culture battles in the US. While some viewed it as despicable and highly disrespectful to American veterans, others felt it was perfectly fine, depending on their political affiliations. The reaction to Haley’s tweet seems to follow the same pattern.