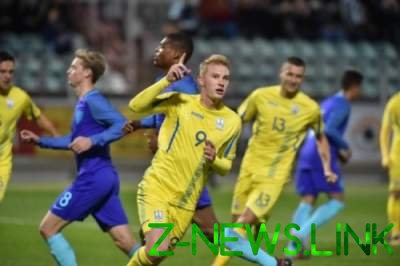 Ukraine’s youth team missed the victory in the home match of the qualifying round for the European Championships 2018.

In the match with Netherlands head coach of Ukrainian youth team Alexander Golovko was able to count on four players of the national team. Victor Kovalenko, Oleksandr Zinchenko, Andrei Lunin and Artem Besedin yesterday unsuccessfully tried to bring the national team of Ukraine in the play-offs for the world championship, and today turned out to be in the starting lineup of the national team U-21.

Exactly Kovalenko on 29-th minute opened the scoring in the match, the Pitmen’s midfielder converted a penalty for handball as the Dutchman in the penalty area.

The hosts had plenty of space to organize dangerous attacks, but with the right decisions this evening in the wards Golovko
there is a serious problem.

In the 62nd minute, Justin Kluivert (son of Patrick Kluivert) scoring strike completed counter-attack the Dutch. On this team and would draw, which is unlikely to suit both sides.