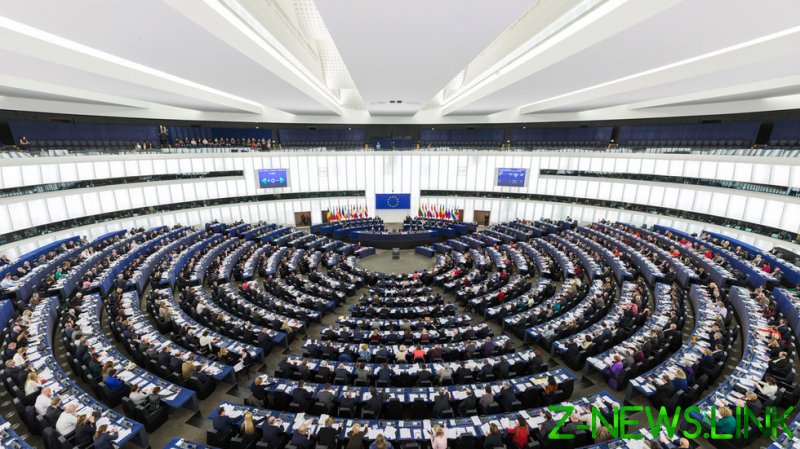 The motion, put forward by representatives of some of the assembly’s largest political groupings, says that recent rows with Moscow over the buildup of troops on the border with Ukraine and the jailing of Russian opposition figure Alexey Navalny shows the need for tough action against the country. However, due to the nature of the EU system, even if adopted it is unlikely to come into effect.

The MEPs “insist that the EU should reduce its dependence on Russian energy,” while urging all member states, “therefore, to stop the completion of the Nord Stream 2 pipeline.” The project, which is expected to be completed in the coming months, has been supported by the German government despite the US imposing sanctions on firms involved in its construction.

At the same time, the draft resolution condemns Moscow’s decision to deploy troops on the border with Ukraine, which Russian officials say was in response to increased activity of Kiev’s own army, as well as NATO forces. If such a buildup were to become what they term as an “invasion,” the lawmakers say that “the EU must make clear that the price for such a violation of international law and norms would be severe.”

Among the measures they put forward in response to the scenario is that “imports of oil and gas from Russia to the EU be immediately stopped.” At the same time, “Russia should be excluded from the SWIFT payment system, and all assets in the EU of oligarchs close to the Russian authorities and their families in the EU need to be frozen and their visas cancelled.”

Last week, Ukraine requested that Moscow lose the right to make use of the SWIFT international payment system, the most common mechanism supporting overseas transactions. Russia has previously claimed such a move would be an “act of war.” The country has said for a number of years that it is developing an alternative, and hinted China could join its domestic-made system.

However, two of Europe’s leading politicians have cautioned against further conflict with Russia in the past week. Austrian Chancellor Sebastian Kurz told reporters that, while “the sanctions already imposed by the EU were the right thing to do,” it is now “important to focus on dialogue.” “Peace on our continent can only be achieved with Russia, not against it,” he said.

German Foreign Minister Heiko Maas also bemoaned over the weekend the “very bad” state of relations between the EU and Russia. He added that dealing with countries one has differences with is the “essence of diplomacy.”

Although the proposals are due to be voted on by a plenary session of the parliament on Thursday, even if adopted in full, the motion would not be binding. Such a move would have to be signed off by the Council of the EU, made up of representatives from national governments. Given growing concern over the impact of hostile ties with Russia, it appears that the prospects of them adopting such a decision is not yet on the cards.