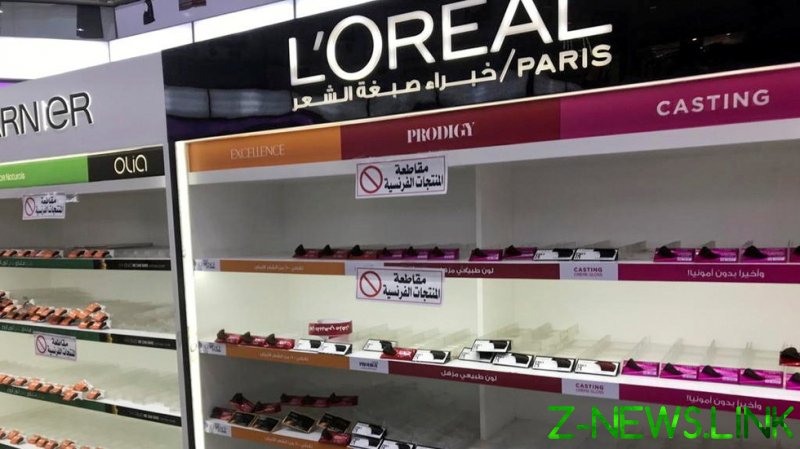 Recep Tayyip Erdogan doubled down on his accusations against France on Monday, officially calling for a boycott of French goods.

“Just like they say, ‘Don’t buy good with Turkish brands’ in France, I am calling to all my citizens from here to never help French brands or buy them,” Erdogan said, again questioning the “mental health” of President Emmanuel Macron. Turkey’s leader already targeted the French president over the past few days and the offensive remarks have prompted Paris to recall its ambassador from Turkey.

It’s quite hard to predict whom will be hurt the most if Turkey actually sees through such a boycott. According to Turkey’s official statistics, France is the 10th biggest supplier of imported goods to the country and the 7th biggest market for Turkish exports. French cars, which are extremely popular in Turkey, are among the primary imported goods.

While the Turkish leadership has been particularly sensitive about Macron’s pledge to weed out radical Islamists in France, other Muslim-majority countries appear to be joining the anti-French drive as well. Protests were staged in war-torn Libya, with demonstrators burning pictures of Macron and the French flag, while boycotts of French goods have kicked off in supermarkets across Kuwait and Qatar.

Some French manufacturers have already condemned as “blackmail” the move by Muslim countries, promising to resist the boycott. The largest French employers’ federation MEDEF described the boycott idea as “foolishness,” admitting, however, that it was bad news for companies already hit hard by the coronavirus pandemic.

“There is no question of giving in to blackmail,” the head of the MEDEF, Geoffroy Roux de Bezieux, told broadcaster RMC earlier on Monday. “It is a question of sticking to our republican values… There is a time to put principles above business.”

Paris has recently tightened its approach towards hardline Islamists, vowing to eradicate the radical ideology in the country. Early in October, Macron said Islam had been in crisis worldwide due to the rise of fundamentalists.

The rhetoric of the French leadership became even tougher after the gruesome murder of teacher Samuel Paty, who was beheaded outside Paris. The attack apparently came in retaliation for the teacher show cartoons of the Prophet Mohammad from the Charlie Hebdo satirical magazine during a class on free speech.

Macron has hailed Paty as a “hero,” who represented all the secular and free-thinking values of the French republic.

“He was killed because Islamists want to take our future,” Macron said while paying a tribute to the teacher. “They will never have it.”