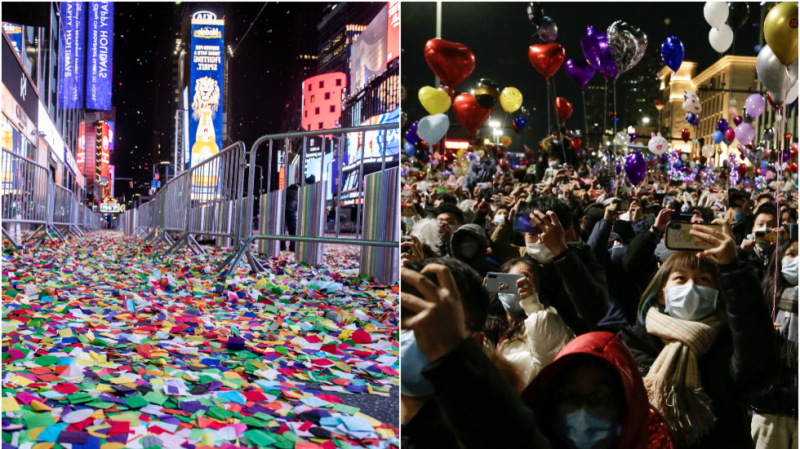 Photographs showing empty streets on Times Square, typically a hub of merry-making on New Year’s Eve, spread across social media on Thursday night, with several commentators noting that the mood was considerably more festive in Wuhan, the Chinese city where Covid-19 was first detected.

Life in Wuhan has mostly returned to normal after the city was subjected to a severe lockdown lasting more than 70 days. New York City has adopted similar, albeit less zealous measures, since the virus reached the United States in March, but is still struggling to contain the disease. City residents were urged to stay at home over the holidays.

The images elicited a range of responses, some of them highly provocative.

Many blamed America’s leadership for the sobering contrast and singled out Donald Trump as ultimately responsible for the nation’s “anemic” Covid-19 response.

Others took a more geopolitical view, saying the photographs were proof that the United States is a “collapsing empire” and that the West has been “nearly destroyed” by the virus “without one single bullet fired.”

“It sends the message that America is broken and China is the new superpower,” one commenter said of the comparison between Wuhan and New York.

Numerous tweets accused China of being responsible for the Big Apple’s empty streets, triggering a debate comparing Beijing and Washington’s responses to the health crisis. Several Twitter users argued that New York could have celebrated New Year as it normally does if it had imposed a “real” lockdown as Wuhan did back in February.

However, commenters quickly pointed out that emulating Wuhan’s lockdown would be highly controversial, since Chinese authorities barricaded – and in some cases welded shut – apartment building doors in order to prevent residents from leaving their homes.

Although some have hailed China’s response to the outbreak, the efficacy of such draconian measures is still unclear. While many claim that lockdowns helped to reduce the pressure on healthcare systems, numerous studies have questioned whether they can actually be used to control the virus. Some research found no clear relationship between death rates and stringency lockdown level, but it did identify that harsher measures caused severe economic damage such as the rise in unemployment.

There have also been questions about whether such extreme limitations on movement and basic freedoms are compatible with Western democracies. Professor Neil Ferguson, the disgraced UK government adviser who was caught meeting with his married mistress in violation of the country’s Covid-19 restrictions, openly admitted in a recent interview that he initially thought only China could “get away” with imposing blanket lockdowns as opposed to just quarantining the sick.

“It’s a communist one-party state, we said. We couldn’t get away with it in Europe, we thought… and then Italy did it. And we realized we could,” Ferguson told the Times.

While there was considerable disagreement over how to interpret the images, few denied how jarring it was to see Times Square nearly abandoned on New Year’s Eve. In fact, December 31, 2020 marked the first time in the 116-year history of the traditional ‘ball drop’ that Times Square was closed to spectators during the holiday.

In Wuhan, huge crowds gathered in the center of the city to mark the new year, although most people were still wearing masks.