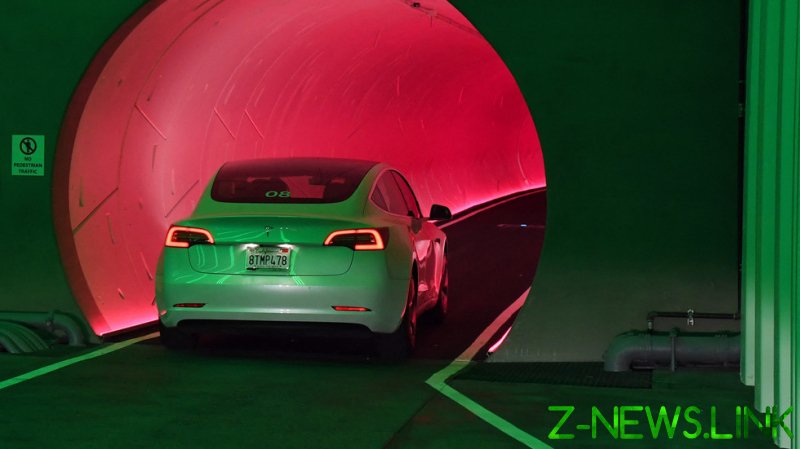 A video has surfaced on social media showing Tesla vehicles stuck in a traffic jam inside Elon Musk’s Las Vegas tunnel, which was built to alleviate the city’s above-ground traffic problems.

The footage, taken from inside a Tesla vehicle, shows clogged traffic in the narrow underground single-lane tunnel. Built by the Boring Company, the ‘Loop’ tunnel runs from the Las Vegas Convention Center’s West Hall to the South Hall and back.

People hop on a Tesla electric vehicle at special ‘stations’ and the cars, driven by humans (for now), deliver passengers to another drop-off point. The tunnel is 1.7 miles (2.7 kilometers) long and apparently cuts the 25-minute walk down to a two-minute drive.

The video shows that the jam in this case was seemingly caused by some congestion at one of the drop-off points. The increase in traffic inside the tunnel coincided with the annual Consumer Electronics Show (CES), held at the Las Vegas Convention Center.

Some on Twitter mocked the fact that a tunnel designed to fight traffic jams has already faced one itself. “It turns out the congestion-busting ‘future of transport’ is already experiencing congestion,” one person wrote.

“Who could’ve predicted this?!” another asked sarcastically.

Musk founded his tunneling company in 2016 and has said he plans to expand the Vegas tunnel to include other major destinations in the city and eventually to connect it to Los Angeles – potentially cutting driving time between the two cities from four or five hours down to under two. However, the billionaire has already seen similar projects scrapped in Washington, Baltimore and Chicago.

Officials in Fort Lauderdale, Florida, greenlit one of his projects last summer.