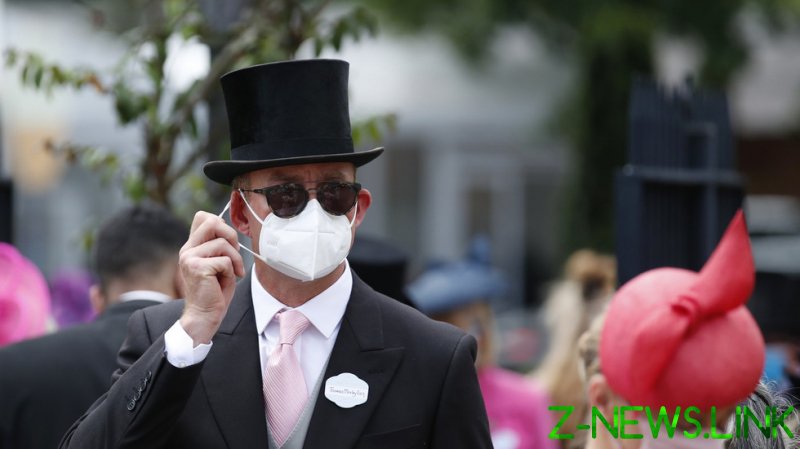 A poll by the market research firm Ipsos MORI, published by the Economist on Thursday, shows overwhelming majorities of Britons supporting most of the current restrictions past the July 19 deadline and even “until Covid-19 is under control globally.”

Moreover, a significant minority said they would like some measures to remain in place “permanently, regardless of the risk” from Covid-19.

Around a third of respondents favored permanent social distancing in pubs and theaters, ten-day quarantines for those returning from abroad, and contract-tracing check-ins at restaurants. A full 40% were in favor of indefinite face mask mandates in shops and on public transport, and even more approved of foreign travel only with proof of vaccination.

Popularity of the 10 pm curfew remained under 30% in all cases, but 19% still supported extending it permanently.

The results prompted the Economist’s Matthew Holehouse to wonder if Britons were really so different in character than “half of Europe” that lived under “repression but also some consent” fifty years ago.

While one might quibble about the poll’s results and methodology, there is no denying the existence of pushback against Johnson’s bid to reopen England come July 19. On Monday, the Blood Cancer UK charity tweeted that for many of their members this would be “the day that it feels like freedoms are being taken away from them,” because they would no longer feel safe among the unmasked.

On Tuesday, the Guardian ran a story declaring the ‘day of freedom’ will instead be a “day of fear” for many. One 34-year-old disabled woman said she felt “hopeless” because others would not wear masks. A 39-year-old office worker said masks should be worn for “just three more months” so all the adults could get vaccinated and everyone could get “be as safe as it’s possible to be” from the virus, including “Long Covid” and new variants.

Johnson’s reopening is “dangerous and premature” as well as “unethical and illogical,” argued over 100 scientists and doctors in a ‘Memorandum Against Mass Infection,’ published on Wednesday in the correspondence section of The Lancet medical journal.

“Many scientists are sincerely concerned that with sub-optimal double-vaccination numbers and rapidly rising transmission rates, we are at a very dangerous moment in the pandemic,” said the letter.

However, some journalists have suggested that at least some of the anti-reopening campaign might be inauthentic. A number of Twitter accounts have posted an identical message, claiming to “speak for all UK citizens” in demanding the continuation of the mask mandate beyond July 19.

The UK hit five million total Covid-19 cases on Thursday, putting it in seventh place globally after the US, India, Brazil, Russia, France and Turkey. There was also a single-day increase of 32,551 new infections and 35 fatalities.