Home / WORLD / ‘Earliest total genocide of WWII’: How the massacre in Gudovac became a step into terror

‘Earliest total genocide of WWII’: How the massacre in Gudovac became a step into terror 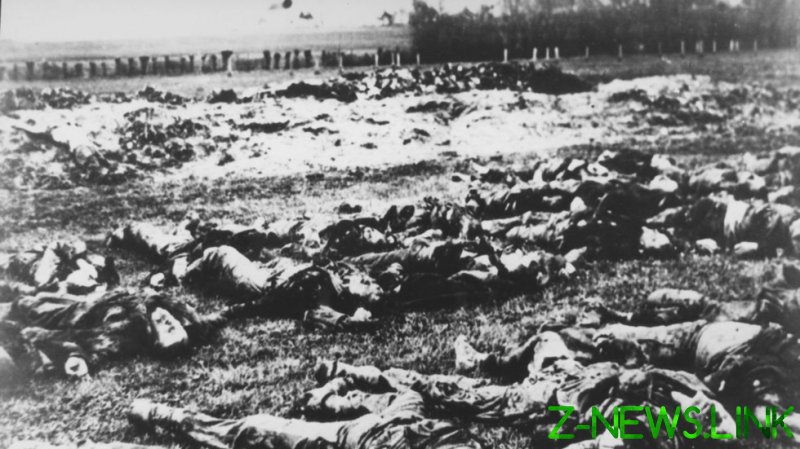 The so-called Independent State of Croatia was less than three weeks old when it carried out its first mass execution of Serbs, the group its founders designated for persecution and extermination long before their ally Nazi Germany formalized its “final solution” for European Jews.

Villages in the Slavonian plain generally stretch alongside roads, to maximize the arable land surrounding them. Gudovac is just one such village, on the western approach to Bjelovar, some 80 kilometers from the Croatian capital, Zagreb. Towards the eastern end of the village are the fairgrounds, where locals would bring their cattle and produce for trade. In the afternoon of April 28, 1941, they would become a killing field.

The Gudovac massacre of almost 200 Serbs, rounded up from 10 nearby villages, would kick off a campaign of mass murder by the Ustasha. Soon they would move from bullets to more intimate implements: hammers, axes, knives and other blades, butchering their victims like cattle. Extermination camps at Jadovno, Pag and later the Jasenovac complex would become names of infamy and terror. The slaughter would last up until the very end of the war – when the Communist authorities would bury the memory of the dead in the name of building “brotherhood and unity” with their killers.

A nest of Ustasha

On April 6, the Axis powers led by Nazi Germany invaded what was then the Kingdom of Yugoslavia, whose weak regency government had signed the Tripartite Pact with Berlin just days earlier, only to be overthrown in a coup. Adolf Hitler vowed to “wipe Yugoslavia off the map” – in part because the Serbs who made up the majority of its people humiliated Austria-Hungary in the previous world war, and led to its break-up in 1918. 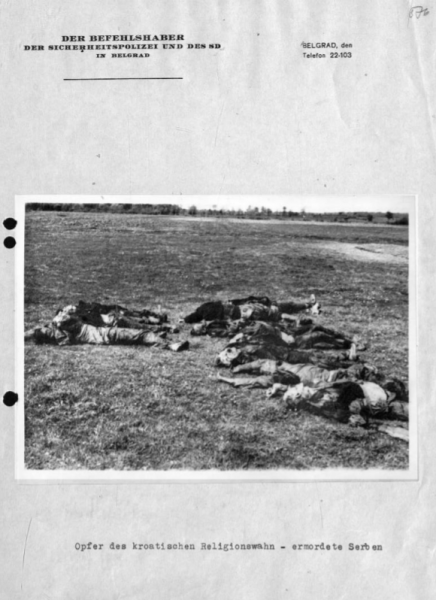 Just four days after the invasion, Croatian separatists known as the Ustasha (“insurrectionists”) proclaimed the Independent State of Croatia (Nezavisna Drzava Hrvatska, NDH). Originally clients of fascist Italy, the Ustasha were a nationalist movement that defined Croat identity through the prism of militant Roman Catholicism and hatred of the Orthodox Serbs, whom they dubbed “Eastern Schismatics.” The Ustasha regime would later publicly articulate their goal for the Serbs: convert a third, expel a third, and kill the rest.

Holocaust scholar Jonathan Steinberg, the late professor of modern European history at the University of Pennsylvania, described the NDH targeting of Serbs as the “earliest total genocide to be attempted during World War II.”

Within days of the NDH’s establishment, local pogroms against the Serbs and Jews began. The Gudovac massacre was the start of something different, though: an organized campaign of mass arrests and executions.

The man from Zagreb

That the Ustasha rounded up and executed local Serbs at the Gudovac fairgrounds is a fact beyond dispute. The role of Eugen “Dido” Kvaternik, a senior Ustasha general, is a matter of some conjecture. It is known that he was in Gudovac on April 28, 1941. His presence suggests that the Ustasha government in Zagreb was directly involved in the events of that day. A day later, Kvaternik would leave for nearby Grubisno Polje, where he personally oversaw the mass arrest of some 500 Serbs, who were eventually killed.

Yet there is no documentary proof that Kvaternik himself gave the final order for the Gudovac massacre. Instead, responsibility was attributed to county commissioner Josip Verhas and Bjelovar police chief Aloysius Chukman, as well as the Gudovac head of the Croat Peasant Protection militia, Martin Cikos.

In the evening of April 27, someone fired at two of Cikos’ militiamen who were escorting a Serb they had detained. One of the militiamen and the Serb were killed, while the other was injured. It was never discovered who was responsible.

After getting word of the incident, Verhas and Chukman drove out from nearby Bjelovar during the night. They confronted Cikos and accused him of drunken indolence while his men were getting killed. Cikos had indeed been out drinking that evening, and with a local Serb no less. To prove his loyalty, the militia leader went back to the man’s house and shot him. Then the round-up of the villagers began. 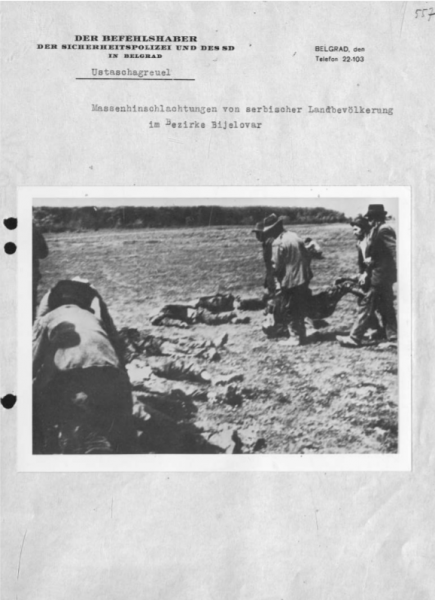 Mass slaughter of the Serbian population in Bjelovar district. © Gudovac 1941. The path of crime, Nebojša Kuzmanović

During the night, 10 more Serbs – residents of Gudovac and Stare Plavnice – were killed. Most of the adult Serb males of Gudovac had been rounded up by noon of April 28, after which the militia and the Ustasha began round-ups in other nearby villages: Veliko Korenovo, Malo Korenovo, Klokocevac, Prgomelje, Tuk, Rajic. In Stancici, Breza and Bolc, only the more prominent Serbs were taken, while the round-ups were more extensive elsewhere.

Late in the afternoon of April 28, some 70 Ustasha and militia members took the captives to the fairgrounds and shot them. Most of the wounded were finished off with knives. Three men who survived were taken to the hospital the following day, after the Germans showed up. Their fate was never established. Only two men managed to escape unharmed: Ilija Jaric from Veliko Korenovo and Milan Margetic from Rajic.

After the execution, the Ustasha had the surviving villagers dig a mass grave and bury the dead, pouring calcium oxide (quicklime) onto the corpses. They did not bother to hide their actions, however, and – as noted earlier – Kvaternik was rounding up more Serbs the very next day.

Meanwhile, four Serb women from Stare Plavnice visited a Bjelovar merchant whose sister worked as a translator for the German garrison commander. Marta Omchikus dutifully passed their message to her employer. The German commander visited the site on April 29, and the Wehrmacht troops were deployed there the very next day, to start the exhumations.

Between April 30 and May 5, some 177 bodies were exhumed and photographed by the Germans. The 11 Serbs killed the night before the execution had been buried elsewhere, though.

The Germans then arrested 40 of the Ustasha and militiamen who had carried out the massacre. At this point, however, Ustasha Interior Minister Mladen Lorkovic intervened to have them released, promising the German ambassador in Zagreb Siegfried Kasche that the incident would be investigated. It never was.

Instead, the Ustasha began rounding up and executing even more Serbs in the weeks and months and years that followed. In February 1942, an Ustasha company slaughtered 2,300 people in three villages outside Banja Luka, without firing a shot. Entire camps would be built, including one for children in Jastrebarsko, part of the notorious Jasenovac complex. 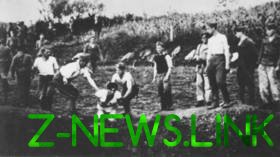 Modern Croatian historians grudgingly concede that 350,000 Serbs may have been killed by the NDH – though German envoys in Yugoslavia had reported that the Ustasha bragged of killing that many by mid-1942. Their outrage and protests to Berlin were shrugged off by Adolf Hitler himself, who urged the Ustasha leader Ante Pavelic against showing “too much tolerance” for the Serbs.

In a twist of fate, Lorkovic himself ended up a victim of Pavelic, accused by the Ustasha leader in August 1944 of treason and a plot to betray the NDH to the advancing Allies.

Ustasha atrocities created a problem for the post-war Yugoslav government, however. The Communists had successfully pressured the king to abdicate, with the backing of Western Allies, but had to figure out how to put the country back together. Communist leader Josip Broz Tito, a Croat himself, found the solution in “equity”: asserting moral equivalence of all non-Communist groups, from the openly Nazi-allied NDH to the royalist resistance in Serbia. If that meant downplaying the NDH genocide of Serbs, so be it

A mausoleum and an ossuary for the victims of Gudovac were erected on the fairgrounds in 1995, along with a statue of a man called “Bjelovarac,” by the sculptor Vojin Bakic. Both were destroyed in 1991, when Croatia again declared independence from Yugoslavia. While the Bakic sculpture was eventually restored, the mausoleum was not.

While evidence of the Gudovac massacre was being destroyed in Croatia, the authorities in Serbia managed to recover some of it by pure luck. In 2008, the Archive of Vojvodina, the northern Serbian province, received seven boxes of personal documents from a WWII veteran, Yugoslav diplomat and security official Slavko Odic. One of the finds in the boxes was a file with some 600 pages, titled “Ustasha atrocities in the NDH,” consisting mainly of German intelligence reports from 1941 and 1942.

One document is a letter from the German military command in Serbia to the German embassy in Zagreb, dated June 25, 1941. It refers to “fourteen photographs, sent by the Serb interior ministry, showing the way in which the Ustasha murdered Serbs in the village of Gudovac near Bjelovar.” Odic’s documentation indeed contained fourteen photographs, labeled as taken in Gudovac or the “Bjelovar county area.”

It wasn’t until May 2019 that the photographs and the full list of the names of the Gudovac dead would be published by the Vojvodina Archive. By then, Croatia had joined the EU and NATO, just as it had once been part of Hitler’s “European family of nations.”