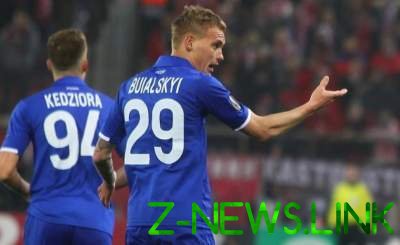 Kiev “Dynamo” in the 26th round of the Premier League won a difficult victory over the “lions”.

The first problems at “the Dynamo” arose in the 19th minute when Burda price of a professional foul brought down Pedro. Central defender of the people of Kiev received a red card and left his team in the minority.

Despite the loss of one player, Kiev, quickly stepped forward. Buyalsky after counter-attacks burst into the penalty area and effectively goalkeeper threw “Lviv”. The replay showed that the midfielder “Dynamo” was minimal offside…

“Lions” with the efforts of their Brazilian players actively went forward, but to break through defence “the Dynamo” owners was not possible. Not helped by the destruction of the second Dynamo – in the 76th minute of Kenjora Pedro squabbled and butted the Brazilian’s head.

In the end luck frankly played for “Dinamo”, when after hitting the ball, Bruno tapped twice on the crossbar and flew not for the free player “Lviv”, and over the goal line.

“Dynamo” at the end of the 26th round of the retained 7-point behind Shakhtar and Lviv suffered a fourth defeat in a row and couldn’t get closer to “Mariupol” in the fight for a place in the Europa League.

Dynamo Matchday 27 will, “Alexandria”, and “lions” long field tour will start the match against Shakhtar.